Battle of the Independents: UMass football travels to BYU to take on Cougars Saturday 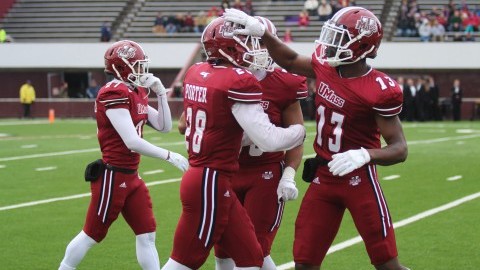 The 2016 Massachusetts football team has made a habit of remaining competitive in games its has no business competing in.

UMass (2-8) gave No. 21 Florida all it could handle in its season opener. The Minutemen held a lead over Southeastern Conference opponent Mississippi State at halftime Sept. 24 at Gillette Stadium and even gave South Carolina a scare, losing by just six points to the Gamecocks.

Saturday’s opponent and fellow Football Bowl Subdivision independent Brigham Young provides the Minutemen with another chance against a big-time opponent and another opportunity to pull off the elusive upset.

Coming off of a bye week, UMass coach Mark Whipple feels like the team is recharged and will be ready to compete against the Cougars this Saturday.

“They needed the bye week,” Whipple said after Tuesday’s practice. “We were a tired team against Troy, not to take anything away from them, you just look at the way the guys have run around the last couple days; it’s been night and day.”

The Minutemen will have a tough task on their hands taking on a BYU (6-4) team that has won five of its last six games. The only loss in the stretch was a 28-27 loss to No. 22 Boise State on the road, a game they led going into the fourth quarter.

“They’ve got a really good team. They’ve played in a lot of bowl games,” Whipple said. “They’re a quality program. It’s a test, another test for us.”

Running back Jamaal Williams paces the Cougars offensive attack with 1,034 yards rushing on the season. Williams did not play and was in a walking boot for last week’s game against Southern Utah, but if he plays he should be a big factor come Saturday.

BYU also employs a dual-threat at the quarterback position in Taysom Hill, who has thrown for 2,057 yards and rushed for 476 yards. UMass has some experience dealing with dual-threat quarterbacks, most notably the Bulldogs’ Nick Fitzgerald, but containing Hill will be one of the defense’s most important assignments Saturday.

No matter whom the Cougars feature on offense, Whipple knows the Minutemen will have a tough task slowing down BYU’s offense.

“They’re an established program. They have more than one guy,” Whipple said. “(Williams) is a special guy with the way Hill runs the ball and the receivers and the line. I’m not going to be disappointed if (Williams) doesn’t play.”

UMass has had a strong offense in its own right, scoring over 30 points in its last two games against Wagner and Troy. The Minutemen will need the continued hot play of quarterback Andrew Ford and tight end Adam Breneman if they want to compete with the Cougars.

Ford has settled into his role as the starting quarterback and rewarded Whipple for his faith in him, throwing for 2,035 yards and 22 touchdowns so far this season. Breneman continues to be one of the most consistent tight ends in the nation. The redshirt junior has 58 receptions and seven touchdowns. He was named a Mackey Award semifinalist Monday, an award that goes to the most outstanding collegiate tight end.

Football aside, a factor that could come into play Saturday is the elevation in Utah. BYU’s LaVell Edwards Stadium sits at an elevation of 4,649 feet above sea level.

Running back Marquis Young and his teammates have been trying to prepare themselves for the uncommon playing conditions.

“We used the (elevation) masks, but coach (Joe) Connolly says the masks aren’t the real deal,” Young said. “We’re going to get a taste of it, going out there and seeing what the atmosphere is like, get used to the air and really just prepare.”

UMass has been the underdog in most of its game this season. Saturday will be no different and the Minutemen know that, but that won’t stop them from putting their best game on the field come Saturday.

“We’re going to have to focus on the small details and focus on ourselves,” Young said. “We can’t get discombobulated when things don’t go our way. They’re bowl eligible. They have something we don’t have, which is wins, so they’re hungry and we just have to be hungrier.”

Kickoff is set for 2 p.m. Saturday.