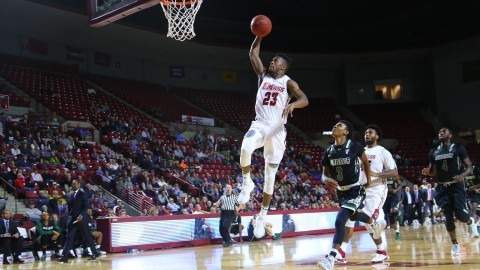 On a night where the Massachusetts basketball team played down to its opponent and its star players struggled to find any rhythm, it was an unlikely cast of Minutemen who gave UMass a much-needed lift.

C.J. Anderson and Malik Hines each had career nights while the bench outscored its starters 40-22 as the Minutemen escaped Mullins Center with a 62-55 win over Wagner in a sloppy contest in which the Seahawks controlled the tempo.

“I thought Malik and C.J. really shined in their opportunity,” UMass coach Derek Kellogg said after the game.

Anderson led all scorers with a career-high 19 points behind an 8-for-11 shooting performance where he made three of his four 3-point attempts. Hines added 14 points and eight rebounds in 27 minutes off the bench.

However as good as the pair played throughout the evening, it was both Anderson and Hines who were in the right place at the right time with the game on the line.

Leading by two with under five minutes to play, Hines grabbed an offensive rebound off a missed 3-pointer from Luwane Pipkins to keep the Minutemen’s possession alive. Eleven seconds later, Anderson hit a corner 3-pointer in front of UMass’ bench to give it a 55-50 lead with 4:44 remaining.

After Anderson’s 3-pointer, the Minutemen (5-1) held a two-possession lead for the remainder of the game to push their winning streak to four games.

“I saw the ball when Malik got the offensive rebound and kicked it out to (Donte Clark) and then he swung it over to Luwane, I saw I was wide open,” Anderson recalled of the shot. “There was nobody there in the zone. I was like, ‘Give me the ball, give me the ball.’ As soon as he threw it to me, I saw I was wide open, so I took my time, set my feet and tried to knock it down.”

“Plays like that, you can’t coach that,” Hines said of his initial rebound. “That’s just the will.”

“He’s our best ball-screen defender as a big guy and I thought that came into play,” Kellogg said of Hines. “And the rebounding, he had 14 and eight and I think those are pretty good numbers in 27 minutes for a big guy.”

Kellogg added: “I think Malik is practicing hard enough and doing some good things that he’s getting his own confidence. It’s nothing that I’m doing or saying, he’s performing. When you perform, you become more confident.”

The Minutemen’s usual suspects in Donte Clark, Luwane Pipkins and Zach Lewis shot a combined 7-for-28 from the field and 1-of-15 from 3-point distance.

“I would say that helps out a lot because you can’t just key in on two guys on this team,” Anderson said when asked about having different players step up. “This year is very different. We have a lot of guys that can get hot on any given occasion. You know come next game you’ll never know whose game it is. You just have to come out there and be ready.”

“Just at the beginning of the game I was feeling good, trying to be aggressive,” Anderson said. We got some early open-floor runs and that got me the feel of the game. Other guys, they were doing their thing, but the shots that they missed are the shots that they hit all the time. In practice and in every game. Come next game on Saturday, they’ll be ready so I’m not worried about it.”