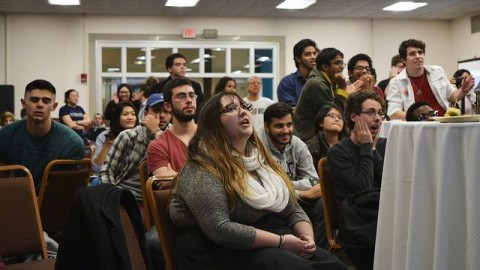 By Hannah Depin and Elizabeth Wallace

Across the University of Massachusetts campus Tuesday, students organized to inform voters and drum up Election Day excitement.

Music blared on Haigis Mall yesterday as representatives from student groups distributed ballot information and directed students to the voter shuttle bus. Representatives from the Student Government Association, the Massachusetts Public Interest Research Group (MassPIRG) and the Cannabis Reform Coalition were present from 10 a.m.to 6:30 p.m. to hand out information about the voting process and inspire students to get to the polls.

“We’re working to get people excited,” said MassPIRG chair Julia Seremba. “This is the last leg of our ‘get out the vote’ campaign.”

According to Seremba and SGA Senator Zachary Best, the SGA arranged for the shuttle bus to transport students from Haigis Mall to the Bangs Community Center, North Fire Station and Wildwood School voting locations. Best estimated that the shuttle returned to campus every 15 minutes to pick up student voters.

MassPIRG volunteers gave students information about the voter hotline, a number that they could text or call if they had any questions or problems after arriving at their voting locations.

At a nearby chalkboard, students could fill in the blank: “I’m voting because…” Answers included “it’s our turn,” “this is our future,” and “it’s lit.”

“We’re trying to make a little noise and get people aware of what’s going on,” said CRC Vice President Robin Striar, who held a “Yes on 4” poster at Haigis Mall.

Striar added that in addition to encouraging students to vote, CRC representatives hoped to distribute information about voting yes on Question 4.

To keep track of the results, there were two electoral maps on the walls of the lounge, which were being updated as states were called for the candidates. Multiple television screens and a large projection screen showed coverage from different news outlets.

Myers is the president of Pi Sigma Alpha. “I’m very excited for tonight. It’s very close so far,” he said.

While Pi Sigma Alpha hosts events open to the campus community throughout the year, these events are normally faculty lectures. The society doesn’t often co-host with the political science department, but Myers hopes to continue the collaboration into the future with other events.

When Illinois, Massachusetts and New Jersey were called for Clinton by CNN during the event, there was thunderous cheering throughout the lounge.

Bridget McKelvey, a freshman political science major, supports Hillary Clinton. At the viewing party in Cape Cod Lounge, she waited anxiously for the results to pour in.

Katherine Stolerman, a senior legal studies major, awaited the results from Florida alongside the rest of the crowd in the Cape Cod Lounge well past the 8 p.m. closing of the polls as the state remained too close to call for over an hour before being called for Trump.

Paul Collins, the Director of Legal Studies and a professor in the department said, “The event is fantastic. The level of excitement is off the wall.”

Collins gave the credit to the students for organizing the event. About the race, Collins said: “I hope it’s not close for the good of democracy. I think it would be a shame if it carried on for days and weeks.”