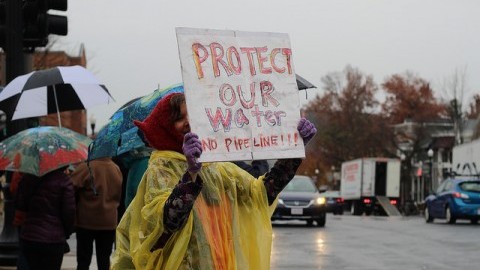 By Jackson Cote and Ariane Komyati

Although the media has been heavily focused on the 2016 presidential election these past few months, immense controversy has also stirred up on social media sites regarding the Dakota Access Pipeline. On Tuesday, Oct. 15, protesters gathered in downtown Amherst to voice their disagreements and the cultural and environmental implications of the pipeline.

Rachel Pizzuti, a sophomore sustainable food and farming major, was one of a multitude of UMass students who made their way to the protest, getting permission from her professor to leave her environment and society class to make it on time.

“Obviously it’s not really getting any attention from the media and it’s not as big of a deal as it should be in popular culture. [I’m] here to show support and solidarity,” said Pizzuti.

Despite heavy rain, about 40 individuals gathered at the corner of Amity and South Pleasant Street, holding umbrellas and signs with slogans like, “Stop the pipeline” in bold lettering and “Ideas of Resistance: no DAPL!”

DAPL is the acronym for the project, which consists of a 1,172-mile, 30-inch diameter pipeline. If constructed, it will produce and transport crude oil from North Dakota, through South Dakota and Iowa, to Illinois.

Environmental concerns surround the pipe’s location, which would lie underneath the Missouri River, a water source for many citizens across the U.S. If contaminated, 20 million people would be out of clean water. Construction of the pipeline would also destroy sacred burial grounds and prayer sites of the Standing Rock Sioux tribe. DAPL is planned to run directly through the tribe’s ancestral homelands.

At the Amherst protest, individuals showed their support for this community by carrying various Native American artifacts and objects, like authentic Native American maracas made from wood and bone. Some protesters also went around reading from books on Native American ceremonies.

“There are a lot of issues out there, but I’m happy that I can be here today and be another person that says, ‘I don’t think this is okay and I’m really concerned with the way we treat the people who were here before us,’” said Evan Kuras, UMass graduate student in environmental conservation.

In the same day, protests occurred in Turners Falls and Springfield, Massachusetts, as well as across the nation.

Hearing about all of these protests is what led Beverley Burton, an Amherst resident and the individual who organized the event, to decide that she wanted to hold her own protest right in the center of downtown Amherst.

Burton is part of the organization 350.org, which connects individuals to grassroots campaigns and projects in order to affect community and national environmental change. She used the site to spread the word about her event, and quickly got responses from members of the community, as well as college students, who were also keen on joining the fight.

Through these protests and demonstrations, many, including Burton, are starting to see hope.

“We’re getting some movement, and today in the paper we learned the U.S. Army Corps of Engineers is holding off on the construction, so we need to continue to fight,” stated Burton.