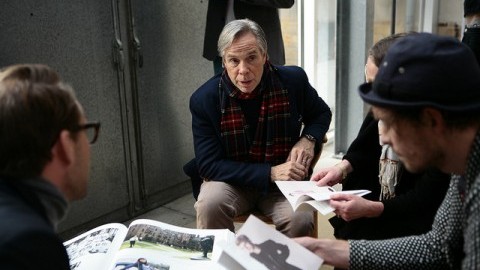 Back in September during New York Fashion Week, Tommy Hilfiger revealed his clothing collaboration with supermodel Gigi Hadid. The carnival-themed show took place at Pier 16 at the South Street Seaport. The setting is said to have perfectly highlighted the nautical-themed collection.

Hadid showcased her line by opening the show in a sailor jacket, tank top with anchor detail, fringe neck scarf and leather pants all from her line. The supermodel is known for her street style and the collection’s statement jackets and slim trousers embodied her aesthetic perfectly.

Hadid takes on many personalities with her outfit choices and those nuances were apparent during the show. Sheer-printed dresses accessorized with fringed bandanas screamed festival girl. Studded biker jackets and distressed jeans screamed rock ‘n’ roll while oversized sweaters served as dresses for Hadid’s bombshell side. Perhaps the most recognizable personality was the sporty and cool one. Hilfiger’s work was not lost as his classics, such as logo tees and tracksuits, continued to make appearances on the runway.

Marketing to Hadid’s large fan base proved to be a good sales technique. According to both WWD and Bazaar Magazine, just 48 hours after the fashion show, there was a reported 900-percent increase in traffic to tommy.com. Items from the new line sold out even faster than predicted.

In this process, Hilfiger experienced double-digit growth in both retail and e-commerce performance after the collaboration was launched. Taking advantage of the collaboration’s popularity, Hilfiger has prepared a new installment of Tommy x Gigi for spring 2017. Hadid’s global ambassador position will also continue into the next season. The spring collaboration will include apparel, accessories, footwear and a fragrance. For the new season, the duo is allowing fans to vote for which pieces they want to see on the runway.

The new initiative, called “<3 to be Part,” will showcase 14 options for fans to vote for based on styles and pieces they think belong in the fashion world. Voting can be done on social media platforms including Hadid’s wildly-popular Instagram account. The winning pieces will be produced for the Tommy Hilfiger spring fashion show (Feb. 2017) and all looks will be available and attainable once they hit the runway.

To involve a larger portion of the general population in high fashion, Hilfiger made the runway show public. Half of the show’s 2,000 guests were shoppers selected through an analysis of the brand’s “Hilfiger Club” loyalty program, the NYC Go website which handed out free tickets and email outreach programs via a few of the brand’s media partners. People who were unable to attend the show could also buy the items as they live-streamed the show on tommy.com. To extend their democratization of fashion into the second season, Hilfiger and Hadid are making use of online voting to get a sense of what their customers want to buy next.

By going on tommy.com and Refinery29.com, you can vote for your favorite polos, hoodies, bombers and jeans from four options in each category. The polos include “the red cropped,” “the white cropped,” “the red polo dress” and “the white polo dress.” Each item features striped collars and playful appliques to mix a bit of fun with formal silhouettes.

The four featured hoodies include “the color-block cropped,” “the navy oversized,” “the gray oversized” and “the gray cropped,” which all share similar appliques and aesthetics to the polos.

Last but not least are the jeans. Ditching skinny jeans, “the cropped flare” and “vintage fit” options are all about new silhouettes and style. At the end of the day, a fashion powerhouse like Tommy Hilfiger and world-renown supermodel like Hadid joining forces leaves little room for doubt the new season will sell out just as quickly as the first one did.

Sophia Liao can be reached at [email protected]