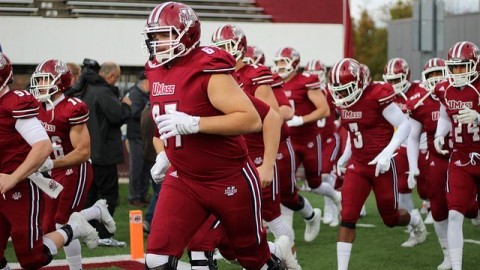 When the Massachusetts football team’s schedule was announced, how many people thought Troy would be one of the hardest games on its schedule?

No one? Maybe a few in the back?

Boston College stood out. Florida, Mississippi State and South Carolina all carried their well-deserved SEC-aura when UMass battled teams from arguably the deepest and most difficult conference in college football. Even Louisiana Tech and Brigham Young created a bit of excitement.

The Trojans (6-1, 4-0 Sun Belt) are a much better football team than you would think. The only blemish on their schedule was a road loss against at-the-time No. 2 Clemson, where Troy battled the Tigers deep into the fourth quarter.

“This is a really talented football team—one of the best we’ve played all year,” quarterback Andrew Ford said after Tuesday’s practice. “We know it’s going to take our best game and our best week of preparation to have a chance.”

Against Clemson, the Trojans forced its Heisman candidate quarterback Deshaun Watson to throw a pair of interceptions. Watson’s 108.4 quarterback efficiency was the lowest he’s had against any opponent this season.

“You have to look at not only the Clemson score, but how they played,” Minutemen coach Mark Whipple said. “Probably Deshaun Watson’s worst game rating-wise, whatever that means. He had a couple of interceptions.”

Whipple added: “[Troy] knows how to win. They’re playing like a team that’s won a lot. They’re getting the bounces and playing really good complementary football. They’re kicking the ball well. In that area they have a lot of skill. It shows up on tape.”

“They were in until the end, and probably should have won it,” Ford said. “That right there shows the caliber team we are playing against this week. You just have to be ready to go.”

UMass (2-7) is going to have to be nearly flawless offensively as Troy is tied for fourth in the FBS forcing 14 interceptions. Blace Brown has four already on the season for the Trojans, while three others have a pair.

Troy’s defense has 10 players with at least 20 tackles this season, as well has five who have registered at least two sacks.

“There’s not just one guy out there doing it, it’s a collective unit,” Ford said. “They have 11 guys flying to the ball all over the place. When you have a defense like that, breaks go your way, and that’s why they’ve created so many turnovers this year.”

The Trojan offense isn’t half-bad either. Troy ranks 24th in the nation averaging 37.6 points per game behind quarterback-running back tandem of Brandon Silvers and Jordan Chunn. Silvers has thrown for 1,834 yards this year with a touchdown-to-interception ratio of 15:6. Chunn’s ran for 816 yards on 156 carries and has scored seven rushing touchdowns.

As talented as the Trojans have played this season, they owe a lot of it to Neal Brown, head coach, who’s no stranger to the Minutemen program.

Brown—the fourth youngest head coach in FBS at 36 years old—played under Whipple at UMass in 2001 and 2002. The next season, Whipple called him and offered him a job coaching tight ends and the offensive line as a graduate assistant.

Brown spent four years with the program—two as an inside receivers coach, two as the offensive coordinator—from 2006-09.

“He loved the game and always did things the right way. He did a good job in school and was a great guy to coach,” Whipple said of his former disciple. “Kids respect him—you can tell by the way they are playing. They have a lot of confidence and are making a lot of plays and that says a lot about his leadership.”

The Trojan’s schedule hasn’t been that demanding playing in the Sun Belt, but having not played a game since Oct. 20, they are a well-rested, relatively healthy team. Vegas odds currently have Troy as a 21-point favorite, which has to stand for something.