Cyr: What’s next for UMass football? 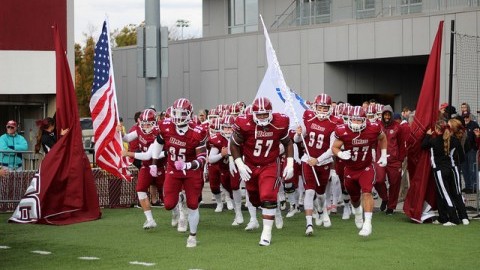 This is by no means a State of the Union address for the Massachusetts football team, but as the final seconds ticked away in UMass’ 46-40 loss against Hawaii into the wee hours Sunday morning, so to did my time covering the team.

I was fortunate enough to begin covering the Minutemen for the Massachusetts Daily Collegian as a sophomore with only months of real journalism and beat-reporting experience under my belt. I hopped on board prior to Mark Whipple’s first season in his second tour of duty coaching UMass, and after three years covering the Minutemen, I leave with one final question:

What’s next for the program?

UMass wraps up its first five years in FBS football with a 10-50 record, and 8-28 in the second coming of Whipple. Everyone knew the jump to big-boy football would be a long, difficult journey, but in a society that expects instant gratification, how much longer are people willing to wait?

Only time will tell.

Plus, if a few bounces went in UMass’ favor, or it made some easy, chip-shot field goals – a constant theme over the past three years – are we looking at a different record? And if so, by how many more games?

If there was any doubt, UMass athletic director Ryan Bamford confirmed with the Daily Hampshire Gazette over the weekend he’s confident in Whipple being the right guy to lead the program, despite finishing the season 2-10.

“Given the maturity of this program, I would take this season and build off it and [Whipple] is absolutely the guy to do that for us,” Bamford said. “I think we acquitted ourselves well throughout the year. With a couple plays here and there, we might have had the opportunity to get a couple more wins.”

Despite losing only 13 seniors, tied for fourth fewest in college football, there will still be glaring holes on both sides of the ball for the Minutemen.

Offensively, UMass will lose three key members of its receiving core (Jalen Williams, Bernard Davis and Dan Jonah) who all played at least 11 games, and totaled 10 touchdowns. It will also be without three starters on the offensive in Elijah Wilkinson (left tackle), Fabien Hoeller (center) and Michael Boland (guard/tackle), as well as fullback John Robinson-Woodgett.

Breneman, who was a John Mackey award semifinalist (award given annually to college football’s best tight end), has until Jan. 16 to declare himself eligible for the NFL draft, if he wants to forgo his final season of eligibility.

On defense, UMass will have to replace key members to its front seven with the departures of Peter Angeh, Peter Ngobidi, Enock Asante and Vondell Langston. Angeh, Ngobidi and Asante all played significantly throughout their four years with the Minutemen, while Langton saw his most playing time this year after Shane Huber suffered an ACL injury midway through the season.

Safety Khary Baily-Smith is the lone defensive back graduating, who was third on the team with 69 total tackles.

After five years splitting home games between McGuirk and Gillette Stadium, UMass is back on campus for all its home games in the 2017 season. The Minutemen’s two wins this season came in Amherst, matching that with a far more manageable schedule – UMass plays only two Power Five teams next year (at Tennessee and Mississippi State) – and with the amount of young starters returning, all things considered, it should see an improvement in the win-loss column.

However, UMass fans more than anyone know that’s not always the case. Expectations were high entering 2015 after making strides the previous year with former quarterback-wide receiver tandem Blake Frohnapfel and Tajae Sharpe, however finished with an identical 3-9 record.

But back to the original question.

The Minutemen still are left without a conference, and after the Big 12 ruled against expansion, finding a new home has now become exponentially harder. How long can – more importantly, will – UMass be able to sustain itself as an Independent?

Again, only time will give us answers.

There’s not debating that the past three years for both the Minutemen and their fans have been frustrating. How many times did UMass play up to its opponents in games it had no business competing in only to fall short at the end, or how many Mid-American Conference contests did it let back slip away? I’ll let the you be the judge of that.

Fans aren’t happy with the poor win-loss record, and you certainly don’t have to ask Whipple or the players’ thoughts on the matter.

Until spring practices begin, the Minutemen can do nothing but recruit and go through their winter workout regiment with strength and conditioning coach Joe Connolly. Players respect Connolly as much as anyone on their coaching staff, and with recruiting now being a year-round process, the process of preparing for 2017 starts now.

It’s been a fun three years and the list of people I could thank along the way would be endless. As a college student working at school newspaper, I was treated like a professional by players, coaches, fans and the administration, and for that I will be forever grateful.