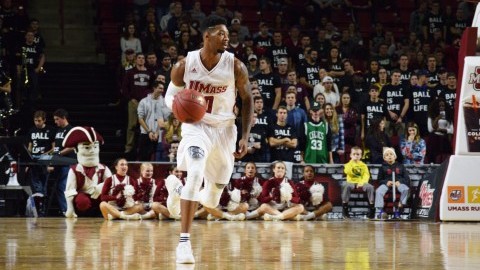 After the Massachusetts men’s basketball team and Harvard battled back and forth for all of Saturday afternoon’s contest, there was little doubt who UMass would turn to with the game on the line.

Trailing 54-53 with just under four minutes remaining and the shot clock approaching zero, Donte Clark heaved up a 3-point shot with a hand in his face in front of the Minutemen bench in an act of last-second desperation.

Clark’s 3-pointer gave UMass a lead it would hang onto for the rest of the game with the Minutemen topping the Crimson 70-66 in the latest thriller of the growing Massachusetts rivalry.

“It seems like all of our games against UMass have been tough, hard-fought, possession-by-possession games where we both have gone down to the wire to pull games out or to have some gut-wrenching losses,” Harvard coach Tommy Amaker said.

Following a Siyani Chambers 3-pointer to give Harvard a 54-50 lead, Clark answered with a 3 of his own to cut the deficit to one with 5:49 remaining, as Clark would go on to score 16 of his game-high 29 points during that final stretch.

Although Clark’s late-game baskets lifted UMass (4-1) to victory in front of 3,320 at Mullins Center, his best play may have come on his only missed free throw of the game.

After the Minutemen watched their eight-point lead with 1:26 whittle down to one after a Corey Johnson 3-pointer and four free throws from Seth Towns, Clark stepped to the free throw line with 14 seconds left with the chance to ice the game.

Clark made the first, but after missing the second he corralled his own rebound despite being the only UMass player in the lane matching up against four Harvard (1-3) defenders.

He sunk both of his free throws after he was fouled, securing a two-possession lead and the win for the Minutemen.

“I was definitely the first person to know (that I missed it),” Clark said. “I took off like I was in a track meet. I knew it was going left, so I just went and got it.”

“There’s no excuse for that,” Amaker added. “It shouldn’t have happened. Give Clark credit for recognizing the opportunity to make that big, winning play.”

“He made big plays at Holy Cross, he made big plays today and I’m anticipating that he’s going to have to make big plays in probably about 15 more games with the way college basketball is going,” UMass coach Derek Kellogg said. “I’m happy to have him.”

Both the Minutemen and the Crimson struggled to find any rhythm for the majority of the first half. At the under-12 media timeout, UMass was shooting just 4-for-15 from the field (1-of-9 from 3) with Harvard shooting 4-for-13 (0-for-2) itself.

The Crimson went on a 10-2 run midway through the first half forcing Kellogg to call a timeout with 8:23 remaining after a Seth Towns 3-pointer and a Chamber strip-and-steal fast-break layup that gave Harvard a 21-17 lead.

Towns finished with a team-high 17 points for the Crimson, while Henry Welsh (12) and Chambers (11) followed behind.

Zena Edoswomwan, Harvard’s leading scorer and rebounder from last year, added five points and 10 rebounds in 23 minutes off the bench.

Lewis’ floater to beat the buzzer sent the two teams to the locker room tied at 32 after an ugly first half. The Minutemen shot just 38.2 percent from the field (13-for-34), including a dismal 2-of-15 clip from 3-point distance.

Luwane Pipkins, who’s been one of UMass’ most solid contributors this season, shot just 3-for-12 from the field and 0-of-6 from 3-point range. He finished with eight points while also adding a pair of rebounds and assists.

“I’d say we’re happy to come away with a win today against a team that every year it seams to come down to the last minute and a half, two minutes of the game,” Kellogg said.