Football Notebook: Whipple opts not to engage in politics in choosing to respect everyone’s space 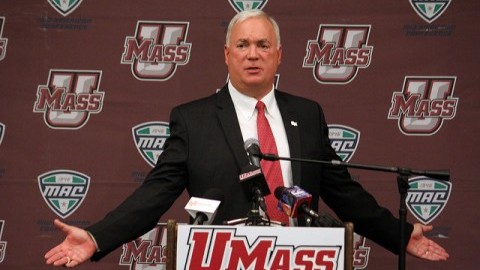 Massachusetts football coach Mark Whipple doesn’t care whether you’re interested in politics or not, or whether or not you took the time to vote in last Tuesday’s Presidential Election.

All that matters to Whipple is that everybody in his locker room respects each other’s spaces, regardless of their beliefs.

“I basically just told them to respect,” Whipple said after practice Wednesday. “That’s the whole thing. Respect everybody. I don’t limit what people can do. If you want to pray before you can pray before or if you want to pray after you can pray after. You can believe in God or don’t believe in God. Just respect everybody’s space – that’s the big thing. That’s always been harped on here.”

The election has created many headlines that have crossed over into the sports world, with athletes and coaches speaking out on both sides.

Here in New England, Patriots coach Bill Belichick wrote now President-elect Donald Trump a note wishing him well as his campaign came to a close, while quarterback Tom Brady called to tell his friend that he supports him.

LeBron James and J.R. Smith took to the campaign trail to join Democratic nominee Hillary Clinton on the stump in Ohio.

For Whipple, there was no talk about politics to the guys in the locker room. Rather, an understood level of respect for each other was the extent of any political conversation.

“In the locker room everybody has their space and respect it,” he said. “Pick up papers, clean up things in the locker room and do things the right way. If anything, I’ve always said that for a long time. We have a great building and a great university.”

While Whipple himself did not vote, as he attended a recruiting trip Tuesday instead, top offensive players and Pennsylvania natives Adam Breneman and Andrew Ford did cast their ballots.

Breneman drove home to vote, while Ford mailed in an absentee ballot in their first time being eligible to vote in a general election.

“This is kind of a new thing for me being my first time to vote and not be able to be in Pennsylvania to vote,” Ford said. “It was different for the both of us. It was an interesting election as everybody knows. Just to be able to be a part of it was something cool for me.”

Ford did not see which candidate he supported.

Ford took full advantage of his bye week, as UMass (2-8) prepares to face Brigham Young in a battle of independents this Saturday in Provo, Utah.

The redshirt sophomore spent his week off recouping and preparing for the next game on the schedule.

“This week was huge for us,” Ford said following practice Wednesday. “Even though it’s late, a lot of guys took the past couple days to get their legs back under them. Even just the stuff we did out there today, you could really see that the guys really benefited from having the past couple days off.”

With BYU and Hawaii as the lone games remaining on the 2016 slate, Ford looks to continue to improve on his game as the season concludes.

“I think we’re progressing,” Ford said. “We’re nowhere near where we want to be yet. For me personally, whether it be practice or a game, the game is slowing down for me a little bit. There’s no better recipe than reps. For me, it’s just taking advantage of the opportunities that I’m getting right now and trying to be the best that I can be each and every day.”

The accomplishments of Breneman have not gone unnoticed this season.

The Penn State transfer was named a semifinalist Monday for the John Mackey award, presented annually to the most outstanding collegiate tight end.

Breneman’s numbers have been impressive. He totals 58 receptions for 699 yards all while snagging seven touchdowns in 10 games this season. He ranks in the top three in the nation in those categories for tight ends.

Tajae Sharpe scored his first professional touchdown Sunday in the Titans 47-25 trouncing of the Green Bay Packers in Tennessee.

The former Minutemen wide receiver caught a 33-yard touchdown reception from quarterback Marcus Mariota, improving his season numbers to 30 catches for 385 yards in his rookie campaign.

Sharpe was a standout on the Amherst gridiron last season. His 111 receptions for 1,319 yards and five touchdowns earned him a chance to play in the NFL as his name was called in the fifth round of last season’s NFL Draft.

Sharpe is making the most of his opportunity on the big stage.