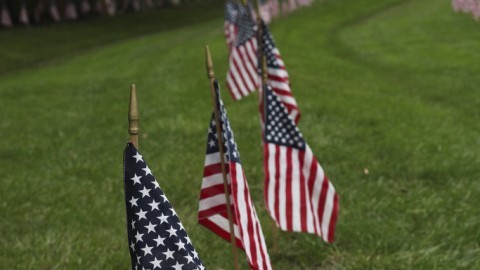 Amherst – The results of the 2016 Presidential election caused outrage and sorrow across America, leading to protests and students walking out of school to express their discontent. At Hampshire college, some students are not regretful after a couple of their peers took protesting to the extreme.

On Veterans Day, just a couple days after Election day, a group of about 150 students burned an American flag in the middle of campus during the dark of the night. “I don’t think anyone here was angry about it (flag burning),” says junior environmental studies major Aaron Rollins. “Emotions were running high after the election and people weren’t happy. We don’t support anything about Donald Trump.”

According to the Hampshire College website for counseling services, the school was offering services to students who were upset about the election. Even at Umass, students were offered the same services.

Many students feel that this move was appropriate considering what had transpired just days before.

“Those students were just voicing their anger, the same anger we all have right now,” says senior biology major Lucy Howard. “Our country collectively agreed on electing a man who preaches hate and disrespects women and minorities. I think it made sense that we are not happy with our country right now, and that’s how we expressed it.”

Hampshire College is notoriously known as a liberal school, with strong LGBTQ and feminist communities.

In an email to students, President of Hampshire Jonathan Lash expressed his sadness.

“I am particularly concerned about members of community who felt themselves specifically targeted during a hateful campaign by repeated racist, Islamophobic, anti-immigrant, anti-LGBT, and misogynistic statements. We saw a candidate mock people with disabilities and deal in anti-Semitic innuendo, heedless of the pain and harm he caused.

“As a feminist, I feel attacked,” says freshman Danielle Obermeyer. “This is such a huge step back for our country.

The elected president openly brags about sexually harassing women, and that is not ok. Me and so many other feminists are terrified to see what the next 4 years hold for us.”

The school replaced the flag for Veteran’s Day and commenced their ceremony, but the campus is still trying to heal and move forward after the election and all that it has brought to their community.

“I don’t think this is a time to give up,” says senior computer science major Alexander Fraker. “This is more of a time for unity, and coming together as one. We can’t let evil take over this country. “

Benjamin Kostyack can be reached at [email protected]