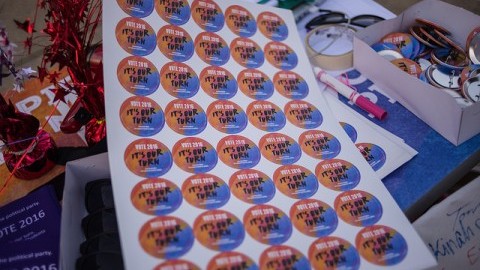 Plato argues that in a democracy, the people will overthrow the rulers of the oligarchy with freedom and equality as the paramount values to uphold in society. However, he explains that this pursuit of freedom will degenerate into general chaos and anarchy. As a result, the people will seek a leader to put an end to the chaos and organize society for the better. This leader will garner the support of the masses with promises to better society, but as the promises fall short, this leader is revealed for what he truly is: a tyrant. Thus democracy degenerates into tyranny.

Plato’s theory offers some cautionary forecasts as to how the next few years of American society can unfold. So against all better judgment, we have elected Donald Trump to be the next President of the United States of America.

As I have argued before and will continue to argue, the next step is not to up and move to Canada, Sweden or any other country far removed from the catastrophe of American politics.

Trump fueled his campaign on rhetoric that preyed on the desperation and fear of millions of Americans who feel betrayed by the system that they put their trust in. Over the past two decades, as the world economy has shifted and globalized, it also changed the job landscape and demographic of America. The majority of Trump supporters, less educated, older white males, feel the system has left them behind and rendered their priorities irrelevant.

These supporters are not “the deplorables.” The desperation that won Trump this election is the same desperation that led many of us, myself included, to vote third party. We are not satisfied with the current system and we want it so badly to change.

However, while candidates like Bernie Sanders and Jill Stein emphasized optimism in the future if we fight for change, Trump preyed on the anger and disillusionment experienced by this demographic, and instead fabricated a reality of a failing America. He chose to magnify this anger and direct it toward easy targets: scapegoating vulnerable groups like immigrants and Muslims.

And so Trump disfigured the valid frustrations felt by his supporters into a grotesque hatred toward “the others.”

Our fear, anger and disappointment at the result of this tumultuous election cycle cannot and must not turn into hatred toward the Trump supporters. Anger begets anger and easily turns into hatred and violence, the opposite of what America needs right now.

I don’t know what the next four years holds in store for us. Throughout this entire election season, I never believed that Trump would win the election. Not once was I afraid that he would be the one sworn into office in January 2017. I was so certain of this that I originally did not write this column.

“There’s no way Trump will win,” were the exact thoughts that ran through my head right before I began my article anticipating a Clinton presidency. Famous. Last. Words.

Now here I am, 1:12 a.m. watching the results reel in. Trump has just won Wisconsin, this being the new addition to the list of states: Ohio, Florida, North Carolina.

I don’t hate Trump supporters. For the first time in this election cycle, I am afraid for what lies ahead of us. But I believe, more than ever, that we need to understand each other. To humanize the other. No matter how incongruous our values are to those of someone who supports Trump (and vice-versa) we need to understand that our feelings stem from disillusionment in our current system.

Like most ideals, this is easier said than done. But it must be done. We must try to understand each other.