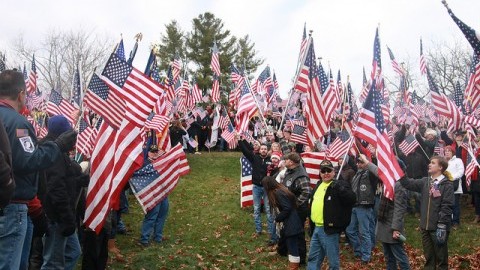 On Sunday November 27th, hundreds of protesters gathered at Hampshire College to protest the decision of the taking down of all American flags across campus. (Christina Yacono/Daily Collegian)

An estimated 300 veterans, families, and protestors gathered by the Hampshire College entrance on West St. this past Sunday to protest the college’s decision to stop flying the American flag on campus.

On  Nov. 18, the president of Hampshire College, Jonathan Lash, made a statement to the community explaining that Hampshire College first made the decision a couple weeks ago to fly the flag at half-staff to allow the campus community to express “grief over the violent deaths being suffered in this country and globally” and to also facilitate more diverse dialogue about the flag as a symbol.

Then, on the Veteran’s Day following the presidential election, a student took down and burned one of the flags on campus. This incident, along with some of the campus communities’ discontent and hurt over the flag being raised at half-staff, called for the president to decide not to fly any flags on campus for now.

The Veterans of Foreign Wars (VFW) Post 754 organized this peaceful rally in response to protest the college’s decision.

“Regardless of what happens, the flag deserves some respect,” said Shutesbury resident Greg Steve, who attended the event with his daughter and wife, carrying three military burial flags of their family members.

The event started at 1 p.m. and continued on until about 2:30 p.m. The rally was centered around a stage setup across from the Hampshire College entrance sign, but spilled across the street. Speakers took turns sharing anecdotes and poetry of war and grief, accompanied by repeated cries to raise the flag.

The crowd chanted slogans such as “raise our flag” and “God bless America” as they waved their flags around in unison.

The rally was civil except for a Donald Trump supporter that was led off site, and a Hampshire college student who  responded to the protest by making obscene gestures when the protesters attempted to take a group picture.

Many others at the protest also agreed with the mayor’s view.

Coming as far as from Wrentham, protestor Christopher Shannon said that although people can hate everything about the United States, the American flag should not be desecrated.

“We’re here to tell the college kids that if you have a reason to fight for something, stand up for the reason, and not for the fabric of this country,” said Shannon.

VFW organizers stressed that they had obtained permission from President Lash to hold this event, which was located on private college property, and expressed gratitude towards Hampshire College in speeches.

Chief organizer of the event Victor Núñez Ortiz wanted to “educate the school that we can do a peaceful protest without violence,” and said he thought they had succeeded.