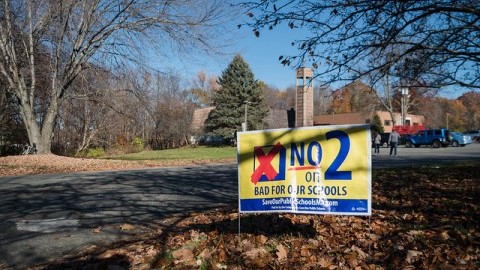 Massachusetts legalized the use of recreational marijuana among those over 21 and struck down a proposed expansion to the state’s charter school program on Tuesday.

Massachusetts also overwhelmingly assigned its’ 11 electoral votes to Hillary Clinton on Tuesday, by a margin of 1,528,750 votes to the 866,955 votes earned by Donald Trump.

Question 1, the statewide referendum on adding an additional license to permit the operation of a new gaming establishment failed, with 977,549 people voting in favor and 1,535,940 voting against.

Question 3, the referendum that “would prohibit any farm owner or operator from knowingly confining any breeding pig, calf raised for veal, or egg-laying hen in a way that prevents the animal from lying down, standing up, fully extending its limbs, or turning around freely” succeeded, garnering 1,992,823 votes in favor as opposed to 571,545 votes against.

The margin of success for Question 4, which legalized recreational marijuana, was 1,379,478 votes in favor to 1,201,801 votes against. It was significantly closer than Question 2, the referendum on charter schools, which only achieved 973,412 votes in favor compared to 1,614,385 against.

The vote count in Amherst served as a more extreme reflection of the state’s results.

Question 4 passed with ease in Amherst, with 10,737 people voting in favor of it compared to 3,677 voting against.

The margin for Question 2 in Amherst showed 11,105 people voting against it as opposed to 3,188 voting in favor.