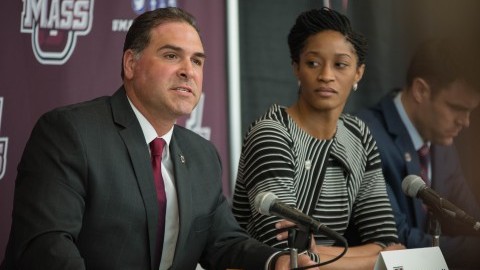 After one of the first practices of the season, the Massachusetts women’s basketball team headed into the locker room to get changed when a simple, three-word message on the white board turned everyone’s heads.

Those three words were written across the board just as boldly and confidently as head coach Tory Verdi took on his new position in the UMass basketball program.

There is a newfound excitement and anticipation for the upcoming 2016-17 season. Most of it stems from the amount of positive attention Verdi has attracted. But the question still remains: What is there left to do with a team which has struggled season after season?

The road to Amherst

O’Brien’s era would mark the last consistent success the program has seen. Since then, the University has employed four different athletic directors, and as of April 9, three different coaches.

“Expectations will be on the rise. Accountability will be apparent and a winning attitude will be instilled,” Verdi said in his introductory press conference at the John F. Kennedy Champions Center on April 14.

Verdi arrived at UMass after spending four seasons at Eastern Michigan, where he accumulated a record of 72-61. Much like the Minutewomen, EMU was a program in the making, and Verdi produced substantial improvement in the team that showed in their record shattering 2014-2015 season.

After going 8-22 in his first season with the Eagles, Verdi turned the program around and led the Eagles to two women’s National Invitation Tournament appearances and the Mid-American Conference championship game in 2015.

The New Britain, Connecticut native prioritized a high-tempo offense, to which the team responded by scoring 2,445 points, the third-most in a single season in school history. The Eagles also dished out 435 assists that year, ranking seventh overall in program history.

Verdi leaves the Eagle’s program having rewritten the record book with 124 different all-time top performances: The most points in a season (2,549), field goals made (936), rebounds (1,539) and three-pointers made (223).

Before EMU, Verdi spent the 2003, 2004, and 2005 seasons on staff with the WNBA’s Connecticut Sun, reaching the postseason each year. In addition, he spent the 2004-05 collegiate season with Columbia University as their top assistant and eventual interim head coach.

It wasn’t long ago though, that former coach Sharon Dawley seemed just as promising as Verdi, sharing his impressive reputation and track record of being a “program rebuilder.” Both also had made trips to the postseason in the previous two seasons before being hired by UMass.

But, Dawley never won more than 12 games in a single season throughout her six years with the Minutewomen, finishing her career at UMass with a 46-133 record.

“This team averaged 68 points per game and only won 12 games last year,” Verdi said in an interview after the team’s first exhibition game of the season. “But that was last year, we’re talking about this year.”

Working with what he’s got

Verdi knows change isn’t going to happen instantaneously, and instead is only focusing on what lies ahead.

Repeatedly, Verdi acknowledged how hard his players work in practice day after day, giving him 100 percent effort every single time.

“I just told them, I said anything is possible, we just have to stick together and believe in one another,” Verdi said. “If we do that we can move mountains together.”

The first full-time male coach in UMass women’s basketball history views his transition to UMass as a rather smooth one, apart from the fact that he’s coming from a full team at EMU to a team with only six healthy bodies with the season starting Friday.

Players expressed their concern about the lack of healthy bodies because of the toll it has taken on them physically. The Minutewomen now are facing the struggle during practice of not having enough players to execute drills in their entirety.

Regardless of how many players he has, Verdi’s appreciation for them and the hard work they’ve showed him has not faltered. His outlook has proven to be infectious, with his players looking at the season in front of them optimistically and only hoping to do their absolute best.

“I think he already has made a difference,” junior guard Leah McDerment said. “It’s a completely different culture here now.”

The prominent differences that Verdi has instilled in the program is also apparent to McDerment’s co-captain, junior Maggie Mulligan, as well as sophomore returner Jessica George.

“We’re growing,” George said. “Every practice we get better.”

Mulligan explained Verdi’s coaching style as much stricter than what she’s used to, but believes it is exactly what UMass needed. The 6-foot-2 forward commended the way he’s been able to pull their six healthy players together.

“Faith in ourselves,” Mulligan said in response to what she believes the team needs the most at this point in time. “As long as we believe in ourselves I think we’re going to go far.”

Verdi admitted that he’s approached this team differently than he has with others, but the kind of team he hopes to put together has not changed.

He added: “We’re going to go out there and try and win every single game.”

The New Britain Sports Hall of Famer thinks the most important thing his team needs is leadership. Taking into account the fact that they’re playing a lot of young players at the moment, starting two freshmen and a sophomore who received little playing time last year, the team needs a leader.

All in all, Verdi hopes to change the expectations of this program.

“The reason why I took this job is to catapult this program into the top 25 in the country,” Verdi said with 19 years of experience supporting his statement.

“We’re going to do that. It’s a process, but that’s our ultimate goal.”