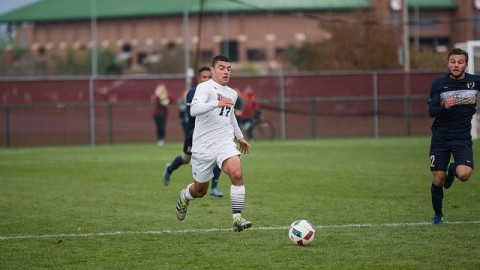 Getting you caught up with everything Massachusetts athletics related:

After playing for 10 consecutive Saturday’s dating back to Sept. 3, the UMass football team finally has its bye week of the season.

The Minutemen (2-8), who are coming off a 52-31 loss against Troy this past weekend, are in desperate need of getting players healthy on both sides of the ball.

While linebacker Teddy Lowery made his first appearance since the Tulane game on Oct. 1, he didn’t record any statistics in his limited snaps against the Trojans. Da’Sean Downey, who leads UMass in tackles for loss (7.5), sacks (five) and forced fumbles (three) did not dress for the Minutemen. Starting right tackle Jack Driscoll also did not play for the second consecutive week.

“Ten games in a row against some pretty good people – we’re just beat up,” UMass coach Mark Whipple told the Daily Hampshire Gazette after the game. “Da’Sean Downey, we thought he could go. He makes a difference in the pass game, and he’s our best defensive player.”

Despite not attempting a pass in the first two weeks of the season, quarterback Andrew Ford threw for three touchdowns passes for the fourth consecutive week, bringing his season total to 22. Ford is now just one shy of Blake Frohanpfel’s single-season FBS record, where he threw for 23 in 2014. The all-time program record is 34 touchdown passes, which was set by Todd Bankhead in 1998.

Adam Breneman’s touchdown in the first quarter of the Troy game also set a new UMass single-season record for touchdown receptions by a tight end with seven.

Both the UMass men’s and women’s basketball teams open their seasons this Friday when the Minutemen host UMass Lowell and the Minutewomen travel to Buffalo to face a familiar face in Cierra Dillard.

Dillard, who led UMass in scoring with 15.5 points per game last season, transferred back home and joined the Bulls after the the Minutewomen did not bring back former head coach Sharon Dawley.

Minutemen coach Derek Kellogg said in practice last week that he hasn’t yet solidified a starting lineup yet for Friday but does expect to see some of the freshmen play significant minutes against the River Hawks.

“I think there’s probably seven or maybe eight starters who could all kind of squeak in there,” Kellogg said after last Thursday’s practice. “But I want to do what’s best for this team and for the program of playing – regardless of age, style, whatever, that we’re putting the best lineup out there at all times.”

The Massachusetts Daily Collegian’s annual basketball issue will be released this Thursday, Nov. 10.

After defeating Saint Joseph’s in the Atlantic 10 championship this past weekend – UMass has won the A-10 title four out of the last five years – the Minutewomen will head to Monmouth (17-2, 6-0 Metro Atlantic Athletic Conference) to face the Hawks this Wednesday at 1 p.m. in the play-in round of the NCAA tournament.

The winner will face No. 2 Maryland in the first round of the tournament Saturday at 11:30 a.m.

The Minutemen will begin their run at the conference title this Thursday when they take on Virginia Commonwealth in the first round of the A-10 tournament.

UMass, which was selected to finish 10th in the preseason A-10 coaches poll, finished 4-2-1 in its final seven games earning them the fourth seed in the conference tournament.

The Minutemen defeated the Rams earlier this season on 1-0 courtesy of an overtime header from Josh Jess.

Opening draw is set for 2 p.m. with Davidson hosting this year’s tournament.