Protests for gender-neutral bathrooms continue for second day in Whitmore 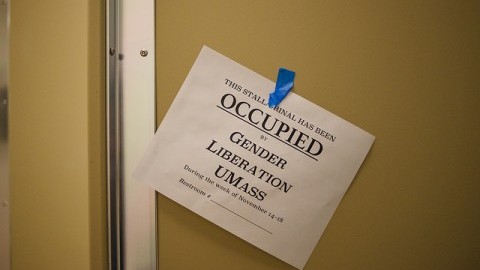 Protesters continued the occupation of bathroom stalls in the Whitmore Administration building for the second consecutive day, in an action organized by the Gender Liberation Union at the University of Massachusetts.

Protesters are demanding the “speedy implementation of campus-wide gender-neutral restrooms” and “the advancement of medically and socially competent in-house transgender services at University Health Services,” according to flyers distributed throughout Whitmore. The GLU is also demanding the “hiring of a professor by the women, gender and sexuality department who is an expert in the study of critical transmisogyny from an intersectional perspective.”

Sam Sexton, an organizer at GLU who is studying linguistics and Portuguese as a senior, said that GLU met with UMass Vice Chancellor of Student Affairs Enku Gelaye on Tuesday morning, and were given a list of actions needed for the implementation of GLU’s demands.

“It seems to have gone well,” Sexton said. “They are very responsive to the action.”

Sexton explained that one barrier to the implementation of gender-neutral bathrooms on campus is the statewide plumbing code, which they said requires a certain amount of gendered bathrooms.

But signs that do conform to these expectations, such as themed bathroom signs reading “moose” and “deer” in restaurants, are a result of plumbing variance, which has to be approved by the Board of State Examiners and Gasfitters.

“Typically that’s how folks are able to do gender-neutral bathrooms,” Sexton said. “I know that’s how Hampshire College did it.”

While plumbing variance approvals can take months to process, GLU organizer Justin Kilian, a senior studying women, gender and sexuality studies, believed that the actions of GLU could contribute to its faster advancement.

“We’re organizers, so we can speed that process up by applying pressure,” she said.

Sexton also said that the sit-ins in Whitmore would continue until GLU could have conversations with relevant figures, such as the WGSS department chair.

They added that GLU had an action plan for constructing the criteria for people to be hired as graduate students to work at the Stonewall Center, a resource center for LGBTQ+ members of the UMass community.

As at the end of Monday, protesters on Tuesday did not occupy stalls compliant with the Americans with Disabilities Act, and did not occupy stalls on the first floor, primarily used by UMass workers and not members of the University’s administration. Sexton also said that some two-stall bathrooms in the building were also being left open for ease of access.

Meredith Gauvin, an undeclared sophomore, said as a student living on the spectrum floor for LGBTQ+ students in the Baker Residential Building, she wanted the trans students she lives with to have multi-stall gender-neutral bathrooms outside of the ones available on her floor in Baker.

“All the other gender-neutral bathrooms on campus are single-stall,” she said.

“We had this event under wraps for a long time so the administration wouldn’t try to stop it,” she added. “After the election results, it made everyone feel more anxious. It made us more open to going ahead and sharing [information about the protests].”

Stephanie Higgins, a junior studying social thought and political economy and public health, said that while she had heard some people getting frustrated with the protests as she sat in stalls, she had not had any negative direct interactions.

“This is long overdue,” Higgins said. “The administration’s been dragging their heels saying it’ll take five years to implement these changes.”