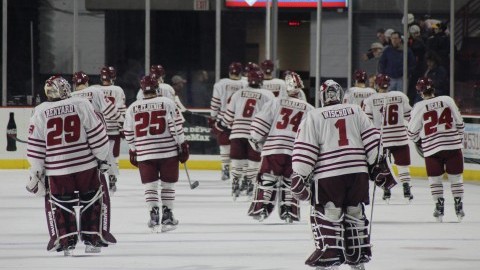 DURHAM, N.H. –– With the game tied 2-2 after one period, New Hampshire scored four unanswered goals, including three in the second period, to pull away with the 6-2 win and sweep the season series against the Massachusetts hockey team Friday night at the Whittemore Center.

UMass’ (3-6-1, 1-4-1 HEA) two goals came from sophomores Austin Plevy and UMass , but the skill and speed of the Wildcats was too much for the Minutemen to handle.

“They have very skilled forwards that made us pay when we played at Amherst and tonight I thought it was the same thing,” coach Greg Carvel said. “Their skilled players made some nice plays, and scored some real nice goals. It felt like anytime we gave them a little time and space they really made us pay.”

Goaltender Danny Tirone had a strong night for UNH, finishing the game with 35 saves, 17 of which came in the final period.

“I thought he was strong,” Carvel said. “We worked a lot of pucks to the net and he stood tall.”

The Minutemen found themselves in an all too familiar position early into the game when Wildcat freshman forward Patrick Grasso ripped a wrist shot off an offensive zone faceoff past UMass starter Nic Renyard (11 saves) just one minute, 41 seconds into the opening period.

Rather than secede to the Wildcats, UMass played harder after falling behind and their efforts were rewarded when Chukarov sent a quick slap shot on net, and ended up beating Tirone at 13:03 mark to tie the game at one.

“Just a good play by Trento rolling out of the corner,” Chukarov said of his goal. “He gave it to me up high and then Niko Hildenbrand went right to the net and got a good screen on the goalie and I was able to shoot it by him.”\

UNH responded less than four minutes later after Salvaggio beat Renyard with a top-shelf snap shot to regain the Wildcat’s lead at 2-1.

The Minutemen swiftly responded with a goal of their own when Plevy buried the puck into the open cage following a heads-up pass from sophomore forward Kurt Keats at 18:01 of the first period.

“Keats, who made a great play, cut across and beat my guy to the back-side,” Plevy said on how his goal developed. “Their goalie plays pretty aggressive, so once I got it I had a lot of time to put it away. It was a great play by Kurt.”

Salvaggio recorded his second of the night while banging in a rebound from an initial shot that ricocheted off the glass behind Renyard out near the crease to give the Wildcats their third lead of the game.

Michael McNicholas and Kelleher each tallied goals on the man-advantage to up UNH’s lead to 5-2.

“I thought for stretches we played pretty well, I thought we competed,” Carvel said addressing the rough second period. “When we competed, when we checked well I thought it created a good amount of offense for us but again it felt like they made us pay anytime we made any kind of mistake.”

“(UNH had) a couple nice goals on the power play, they seemed to come right at us,” Plevy said. “We were prepared for it, it was just a couple missed assignments and they made us pay for it.”

“Just sloppy mistakes, soft plays out of our own end,” Chukarov added, summarizing the period. “With this kind of team if you give them any kind of space they’re going to make you pay and that’s exactly what we did.”

“I think we hung him out to dry on a lot of those goals,” Carvel said. “Again, those guys got those pucks away pretty quick and we could have been better.”

UMass next heads to Belfast, Northern Ireland to participate in the second annual Friendship Four Tournament where it will battle Vermont in the series opener.

“Obviously we’re a ways from home, so we got to start taking care of our bodies now since it’s going to be a tough trip. But we’re excited, we just have to take the positives where we can find them,” Plevy said.