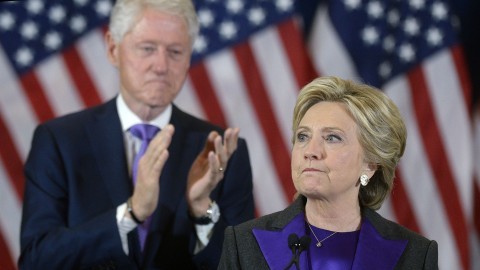 I was so excited to cast my vote with my country, and elect Hillary Clinton as our first female president. But that didn’t happen last night and instead, I spent most of the night being very sad.

My Oma, an immigrant, once told me that the main reason she got her full United States citizenship when she came to America was so she could vote. She is 91 years old and loves Hillary Clinton, and I am so sad thinking of her, alone in Florida, doubting our country’s capacity for the requisite compassion we need to keep the same promises of freedom and equality that welcomed her here almost 60 years ago.

For her and for Clinton supporters everywhere, I am sad. For the innumerous minorities who feel that their president-elect doesn’t care about their safety, I am sad. For all the little girls who just missed their chance to grow up with a woman in the White House, I am sad.

But after we’ve all had our chance to grieve and reflect, a necessary part of this process, it will eventually become time to move forward from our sadness and address the discussions, serious or not, about leaving. It’s been a common conversation, with Clinton supporters saying, “I’m moving to Canada,” and Trump voters responding, “I’ll help you pack.” Very few of us actually have the means to move our lives to another country but even without a plausible “way,” the wide-spread “will” to leave concerns me.

Such a will to leave can manifest itself in many ways other than geographic relocation. Some may simply get lost. So appalled at the choice of Donald Trump for president, they’ll use their voices to ring out cries for impeachment, and use their time to remind everyone of his past. I’m not saying that his past offenses should be forgiven, as they should not, but I hold that to dwell on the ugly hate of his campaign and condemn the future of his presidency before it has even begun is surely to be lost.

Others will leave the fray, revert to silence or cynicism, and bow out of the great conversation. For many non-Trump supporters, the endurance of 18 months of relentless vitriol that paid off with such a terrifying ending will prove to have been enough to make one wish to throw in the towel. Who among us “blue voters” didn’t feel at least a little like that last night?

The point is, we can’t let ourselves get lost – despite how easy those roads may seem. This country, this office of the presidency and this man who will be our president are complicated beasts that require a type of scrutiny and maintenance that must be constant, collaborative and progressive in order to be effective.

It’s in our constitution that “we the people” will always have more power than the president, so we must use the freedoms which that document affords us to check and interact with him and his office. It is irrefutably true that the only way we can maintain the integrity of our country’s very core – our democracy – is by engaging with it, moving with it and never letting any one man, woman or election discourage us from exercising this essential freedom.

Hopelessness, cynicism and fear are powerful feelings. Overcome with such feelings, it would be understandable to look at this country as some wild bucking bronco: uncontrollable, unpredictable, dangerous and mean. But lest we forget that the only way to stay on such a horse would be to bear down, hold tight and fight to take control. This is no exception; the horse may buck, the train might teeter off the rails, but we must stay.

Our country’s heart lives in the inscription on the Statue of Liberty. “The New Colossus” reads, “Give me your tired, your poor, your huddled masses yearning to breathe free, the wretched refuse of your teeming shore. Send these, the homeless, tempest-tost to me, I lift my lamp beside the golden door!”

That message of welcoming, of America as a home and as a place to stay and thrive and create a life defined by liberty is what this country is all about. Don’t let one man, or one devastating election make you forget this. Don’t leave. Stay.