Students come together for ‘Ignite Your Right: Humanity Against Trump’ event 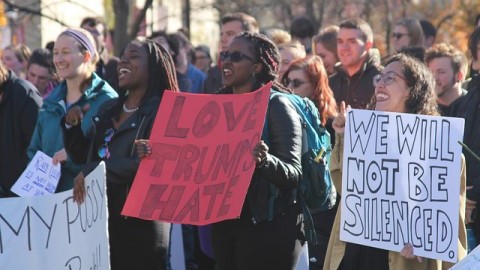 University of Massachusetts students gathered on the lawn outside Goodell Hall for the “Ignite Your Right: Humanity Against Trump” event Friday afternoon, before marching into downtown Amherst in response to Donald Trump’s election as president of the United States.

A series of speakers and performers addressed a crowd of approximately 200, sharing music, chants, and messages of unity and determination.

Kyle Hartmann, a senior theater major and one of the organizers, said the idea for ‘Ignite Your Right’ began with Wednesday’s History of the Civil Rights Movement class, after which a spontaneous demonstration began in response to the election results. Students decided to plan for another event that would feature speakers and performers in addition to a march.

Hartmann explained that the students plan to keep ‘Ignite Your Right’ active in the weeks and months ahead. “This is the start of a student grassroots movement,” he said.

In their opening addresses to the group, organizers encouraged the crowd to work together peacefully, repeating Michelle Obama’s phrase, “When they go low, we go high.”

They added that if the crowd encountered heckling or harassers, they should link arms and chant: “Ignite, unite, we won’t engage in fight.” A few Trump supporters who attended the rally did not appear to affect the course of events.

“We want to make it clear that this is a space of visible dissent against the hatred and oppression that is manifested in Trump’s administration,” Hartmann said in his opening remarks to the crowd. “…We are working together, we are combatting hatred, and we are a unit. We need our voices to be heard and they will be heard.”

Robert Williams, a UMass graduate student and a teaching assistant in the History of the Civil Rights Movement class, spoke about the power that millennials have to enact change.

“The last time there was a generation that was this big, Jim Crow fell,” he said.

He also addressed members of the crowd who hold privilege, explaining that those with more privilege have a responsibility to demonstrate trustworthiness and stand up for others.

“You have to make yourselves trustworthy every day,” he said. “That’s your responsibility. That’s how we unite. That’s how we get everybody outside.”

Elliot Jerry, a senior political science major, spoke about the importance of unity and continuing to act.

“At moments like this we need to remember that our success is contingent on working together,” he said.

Jerry also spoke about his experience working for the Bernie Sanders campaign last year, and how he faced disappointment when Sanders lost the Democratic primary. He said he strove to be “unstoppable” in the face of these setbacks for the sake of his and others’ futures, and encouraged the crowd to do the same.

“Being unstoppable is not about how many times you fall, it’s about how quick you get up. Being unstoppable is knowing that failure is only delayed success,” he said. He went on to quote his supervisor on the Sanders campaign, who would say, “A movement is made up of a series of moments.” Jerry added that the ‘Ignite Your Right’ rally was one such moment.

Scottish exchange student Hannah Frances Morris, a junior studying English and philosophy, shared her perspective on the election results as a Scottish citizen who experienced the Brexit vote.

“Wednesday morning, I left my dorm, and I saw the same feeling as I saw in Scotland,” Morris said. “The feeling was disassociation, loss and fear.”

Morris continued that the crowd should stand up to racism, sexism, xenophobia and other forms of oppression, without placing too much blame on “garden variety” Republicans who may have voted for Trump.

“You can’t let that [anger] fester,” Morris said, adding that she wanted people in the crowd to “hug a Republican.”

Later, organizers announced that the crowd would march together toward Amherst, and that a car was available to transport people of different abilities.

On the march, demonstrators recited a variety of chants, including “No more drones and deportation, end imperial occupation,” “We reject the president-elect,” “Black lives matter,” “Trans lives matter,” and “We are unstoppable, a better future’s possible.” Many on the march held signs, including “Love Trumps Hate,” and “Make America Safe Again.”

Marchers continued off campus and up North Pleasant Street, before gathering on the green near Amherst College.

“Look at what we’re doing,” said Hartmann when the group had arrived. “We will unite in this time of strife, we will ignite our rights because we deserve to.”

After a moment of silence and reflection, organizers encouraged the crowd to reach out to one another and introduce themselves, before the crowd gradually dispersed.