Students craft to show support for protests against DAPL 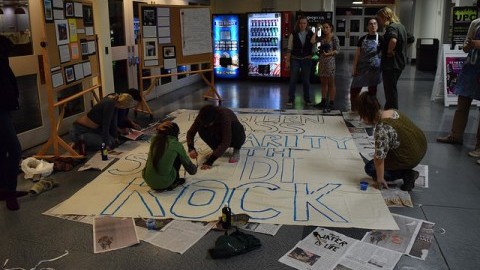 Students make a sign supporting Standing Rock outside the craft center in the Student Union on Nov. 3. Sam Anderson/Daily Collegian)

The Native American Student Association and the UMass Fossil Fuel Divestment Campaign held an arts and crafts build on Thursday, November 3rd which ran from 6 p.m. to 8 p.m. in the Student Union Craft Center. Students and supporters were able to come and show their solidarity for Dakota Access Pipeline protesters through the making of buttons, t-shirts, jewelry, posters and various other crafts. These items were sold the next day at the Farmers Market to raise money for the protesters at Standing Rock.

The President of the Native American Student Association and a senior studying nonprofit administration, Andreus Ridley, was making t-shirts in hopes to raise awareness about the current issues surrounding the North Dakota pipeline. Ridley, one of the organizers of this event, stated that this is important to him because of his Wampanoag heritage.

Ridley believes that the protests represent more than the opposition to the pipeline, but the ability for natives to exist as people.

“In order for the tribal people to prosper, they need to have clean water,” said Ridley.

Students at the event used assorted papers and magazine pages to design their pins. The pins carried unique messages to go alongside the tone of the protest, such as “NODAPL,” “You can’t drink oil” and “Protect native tribes.”

Cesi Marseglia, a senior studying social thought and political economy, showed her support through the making of buttons.

She expressed a strong desire to show support for the protesters who have been fighting for their land and against colonialism for centuries in North Dakota.

“Native people have been here, this isn’t new,” said Marseglia. “They have around 300 different tribes coming together and that is utterly inspirational.”

Faye Alkiewicz, a University of Massachusetts Amherst Alumna and member of the Nunatsiavut Government in Canada, came on Thursday night to show her support as well. Alkiewicz was making buttons with an aesthetic design on them, which she noted as an “inuksuk.”

The inuksuk is special to her tribe and symbolizes home. An inuksuk is built of stone and depicts a small person, which would direct people of the tribe towards home in the tundra. Alkiewicz put these on her buttons to show that there are other indigenous people from across the nation who are standing in solidarity with the protests.

“I’m really glad that there is a community on this here at UMass,” Alkiewicz said. “It’s also important to think of the environment.”

The $3.8 billion Dakota Access Pipeline is planned to be built by Texas-based Energy Transfer Partners through an area that would destroy a sacred burial ground of the Standing Rock Sioux tribe. It is also argued that this pipeline has the potential to poison water from the Missouri River, which is the primary source of drinking water for the tribe. The pipeline is planned to transport oil between four different states.

Outside of the main event, Molly Spring, a senior in public health, was painting a large banner. Spring said that when she first heard of the pipeline being built, she immediately thought of it as a climate change issue and another marginalized group being “screwed over.”

She believes there has been systematic exploitation of indigenous people in this country,

“The pipeline was initially supposed to be built elsewhere, but the white people didn’t want that so they relocated it to native lands,” Spring said, “I want to engage in this solidarity because if they [Standing Rock] can, I can too.”

Becky Woodcock, a junior natural reserves conservation major and an arts and crafts center employee, was impressed by the huge turnout that the event had.

“It gets more people into what is currently going on, in both the crafts center and the cause that Divest UMass is promoting,” Woodcock said.