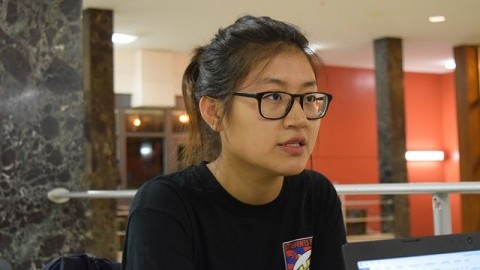 The UMass Students for a Free Tibet is a small group of University of Massachusetts students that aims to engage the campus with issues concerning Tibet. The club organizes numerous political and cultural events throughout the year.

Club President, Kalsang Nangpa, a senior public health major, believes that the first step in organizing for a free Tibet is education.

“We start off by explaining background and history, how China occupied Tibet in 1959, and then we discuss the more current human rights violations in Tibet,” said Nangpa.

The human rights violations the group campaigns around are often brought to their attention by the parent organization, Students for a Free Tibet, she added.

In October, the UMass chapter helped organize a rally in Northampton in support of Larung Gar monastery in eastern Tibet, one of the largest Tibetan Buddhist academies in the world. Last July, officials began demolishing buildings at the site of the academy, causing many of the roughly 10,000 residents to leave. According to Nangpa, several nuns from Larung Gar have taken their lives since the demolition began.

“Once again, it’s another huge human rights violation,” she added.

UMass students, supported by Amherst College Amnesty International and the Five College Students for a Free Tibet, marched across downtown Northampton on Oct. 19 chanting “stop the demolition” and “religious freedom in Tibet.” The march ended in front of the city hall where group representatives explained the march’s purpose. Keith Barnicle, a district representative for U.S. Representative Jim McGovern, read McGovern’s statement of support for the cause. After the remarks, demonstrators collected signatures for a petition urging Secretary of State John Kerry to take up the cause.

Recently, the group also collected signatures on campus for a Tibetan writer known as Shokjang, who was sentenced to three years in a Chinese prison in 2016 because of his writings that the government deemed to be politically inflammatory.

Nangpa estimates that the club has about 12 active members, and finds students on campus to be supportive of their causes.

“We do find that people are interested,” Nangpa said. “Last year especially was quite exciting.”

Last year, the club held a large Tibetan cultural celebration in the Cape Cod Lounge. The event featured food from the Tibetan restaurant Lhasa Cafe in Northampton, a reading of a Tibetan children’s storybook read by the writer herself, and Tibetan dance performances. The group also brought in a student from Hampshire College who studied at a Tibetan institution in India and presented on Tibetan Buddhism and meditation.

The group is currently planning a screening of the documentary “Bringing Tibet Home,” which recounts the story of a Tibetan artist whose father’s one regret was not seeing his homeland before he died. The artist smuggled soil from Tibet for his father to see and feel.

“It’s a very emotional movie for Tibetans born in and out of Tibet,” said Nangpa, who explained that many Tibetans are born outside of Tibet and have never seen their homeland.

Although plans for the documentary screening aren’t final, the group hopes to collaborate with the Yuri Kochiyama Cultural Center to show the film later this semester.

The group is also organizing for a Dec. 10 event in observance of Human Rights Day, and hopes to bring activist Ngawang Sangdrol to campus to share her story. Sangdrol is a Tibetan Buddhist nun who fled Tibet and currently resides in Boston.

Nangpa says that these political and cultural events are meant to educate and empower the community. “We’re urging people to take a stand for Tibet,” she said. “We’re urging them to do something about it. Our goal is to make our club bigger and have more people engaged in the movement.”

More information about UMass Students for a Free Tibet and its events can be found on the group’s Facebook page.