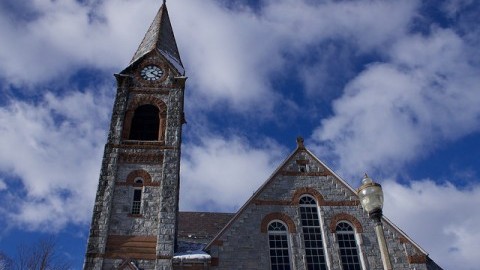 After closing its doors for more than a decade, the University of Massachusetts Old Chapel will soon be reopening to the public later this fall, and will be available to all members of the community as a facility for programs and events.

Arguably one of the University’s most iconic flagship buildings, the Old Chapel has been undergoing its $21 million renovation since May 2015. However, the building itself has not been accessible to students since 1997, when it was closed due to structural problems.

Jorge Reyes-Lebron, a junior and peer mentor in the history department, remembers his freshman year when he would hear the ringing of the Old Chapel’s 1000-pound bells as they played the University’s alma matter.

“I don’t remember what time of the day it was, but just random times of the day, you’d hear the alma matter, just going off on the bells,” recalled Reyes-Lebron.

Hearing the bells play regularly again, as well as being able to go inside the Old Chapel and see some of its historic features, is what Reyes-Lebron is looking forward to most upon the chapel’s reopening.

He is also excited that construction is ending so that he, like many other UMass students walking through campus, can walk along the building’s premises and get to class on time.

While exterior renovations to the building, such as its new glass entry pavilion, can already be seen by students walking by, interior changes to the Old Chapel will not be seen until its reopening. These changes include a new lobby and multipurpose space, as well as alterations to the platform and balcony areas of the second floor’s Great Hall.

Administrative members involved in the project, including Ed Blaguszewski, executive director of strategic communications and special assistant to the vice chancellor for university relations, intend for these first and second floor spaces to be utilized by students, faculty and alumni for a wide variety of events, ranging from weddings and reunion gatherings to guest lectures and artistic exhibits.

“We believe that as a restored iconic facility on campus, it will be a point of pride for current-day students who will also return for events there in future years as alumni,” said Blaguszewski.

The hope that the Old Chapel will return to its historic uses and become both a prominent and accessible flagship landmark on campus, is a hope shared not only by the administration, but by students too.

Anthony Vitale, president of the Student Government Association, is in talks with the administration to set up a policy favorable to student use of the new space. Vitale sees the Old Chapel as a viable alternative to other buildings commonly used by student organizations, such as the Student Union and academic buildings after hours.

“For example, if a student group is doing a comedy show, or something like that, that would be a really awesome space to have that in, rather than having it in the Herter extension, or the Herter Annex,” said Vitale.

Vitale is also excited for the building to become a more integrated facility and long-lasting symbol for students.

“Since 1997, all those generations of students have just walked by the building, looked at it, recognized it as a symbol of UMass, but never have actually taken part, been in it, used it for any purpose,” said Vitale. “I hope that with proper student use of the space that it will become something that students have as a symbol of the University.”

The estimated completion for the construction, according to the UMass website, is late November 2016.