The future of the Republican Party 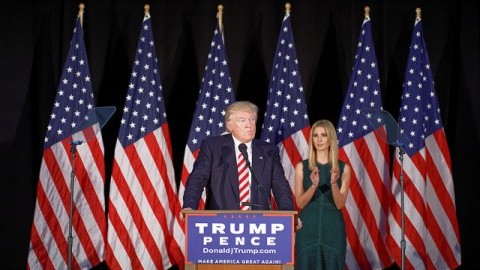 It’s no secret that today’s election represents a potential turning point in the future of the country. Though, it can also represent a pivot for the Republican party. The numerous clashes between the party leadership and its nominee, Donald Trump, have led some to speculate that the Republican Party elite could implement a system akin to the Democrats’ controversial superdelegates in order to give party elders more control over the nomination process. However, whatever happens tonight could drastically change the vision and outlook of the next four years of the GOP. There are a couple of scenarios that could occur; within the realm of speculation, it’s worth examining what could happen to the Republican (and Democratic) parties if they occur.

Scenario 1: Clinton wins by a wide margin, which party leaders like John McCain, Reince Priebus and Paul Ryan are quietly hoping for but don’t want to actually express support out of fear of upsetting the base. A landslide Clinton victory would allow the RNC to issue a sort of “I-told-you-so” to its base and steer the party away from the immigration politics of Trump toward the more moderate immigration plans of Marco Rubio. For the Republican members of Congress, another Democratic president isn’t the worst thing they could imagine; they would simply continue doing what they’re currently doing. At worst, they fear that Clinton would be Obama 2.0, whereas Trump could be completely unpredictable. Though the Republican base clearly favors Trump’s uncertainty and personality politics, the party leaders would rather opt for stability, even if it means a Democrat in the White House for another four years.

However, this isn’t to say that the party leadership wants the down-ballot tickets to fail too. Rather, it’s likely that they’re hoping to maintain a Republican House and Senate while only opposing Trump at the top of the ticket. FiveThirtyEight reports that while Clinton’s lead over Trump increased in October, the Democrats didn’t experience a corresponding increase in their Senate chances. Democrats still have a slim chance of reclaiming the Senate (53 to 47), but Republican leadership is focusing on the idea they can strategically lose the Presidency while keeping Congress.

Scenario 2: Clinton wins by a narrow margin. This is what the Republican leadership fears most. Every single member of Congress who opposed Donald Trump, including McCain, Kelly Ayotte, Lindsey Graham and Susan Collins will be blamed for the loss. The real Republican Civil War, according to Vox’s Andrew Prokop, would begin not at the onset of Trump’s bombshell tape describing his sexual assaults, but the day after the election. These Senators who oppose Trump are already facing an uphill battle in their re-election races and it’s entirely possible than a narrow Clinton victory would cause them to lose their primaries in the next election cycle.

Scenario 3: Trump wins by a narrow margin. Here’s where it gets harder to predict. This is because Trump, by his nature, is unpredictable. The party leaders who opposed Trump would soon be vilified and would likely lose their re-election campaigns; older Senators like McCain might even decide not to run for re-election. Ryan would bear the brunt of the heat for not fully supporting his party’s nominee and might lose his position as House Speaker. Under this scenario, it’s unclear who will have control of Congress but the ultimate loser here is the GOP establishment. The party’s old plan of making its message softer and more moderate in order to appeal to women and minorities would essentially be abandoned, and it would be uncertain whether they’d be able to keep the presidency for longer than a year.

Scenario 4: Trump wins by a wide margin. I believe we can safely discount this possibility. Despite the parallels that Trump may draw between his campaign and Brexit, the polling data two days before the election shows that Clinton still has a heftier firewall than Trump, and that if he were to win, it would be unlikely and by a small margin. Her margin of victory is still more precarious than Obama’s was in 2012, but Trump’s path to victory would involve winning every single swing state, a statistical unlikelihood. And yes, this is after accounting for the Shy Tory Effect. Suffice to say if this occurred, it’d be pointless to predict what happens next. Our predictions of the outcome would have to be so flawed that it would be senseless to make predictions of events after the outcome.

So what does this all mean? This means that, for the sake of both parties, the party elites will be hoping for a decisive Clinton victory. The Republican Congress can maintain its existing obstructionism without much hassle during its transition, while also pivoting its platform toward a message that would be more palatable with women, LGBTQ+ and minority voters. Democrats, obviously, would also prefer this scenario as it gives them control over the Supreme Court for the next few decades. Now, of course, this only discusses the implications of what happens to the two major parties. It’s difficult to say for sure what each of these outcomes represents for the future of third parties, factions within each party and of the American people themselves. However, as Republican former President George H.W. Bush seems to agree, a Clinton win would be overall much better for the stability of the GOP and of the country. And, of course, as virtually every major Democrat believes, a Clinton win would also be good for the Democrats and for the American people.