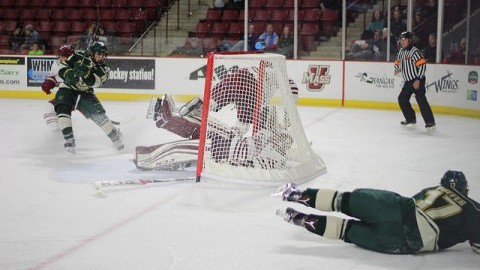 Hockey vs. Vermont on November 12, 2016 at the Mullins Center. Ryan Whischow (1) is defending the net. Caroline O'Connor/Daily Colegian)

The Massachusetts hockey team was swarming the offensive zone during the final few minutes of its Hockey East contest with Vermont.

Shane Bear was denied on two separate occasions by goaltender Stefanos Lekkas, four shots were blocked by the Catamount (5-3-1, 2-2-0 HE) defense and nine shots could not find the net as UVM took a 2-1 lead it would not relinquish Saturday night at Mullins Center.

Matt Alvaro made UMass pay for not capitalizing on its third period opportunities.

After Kevin Irwin’s shot from the left circle was initially stopped by Minutemen goaltender Ryan Wischow, Alvaro corralled the rebound off Wischow’s pads and deflected the puck off of Shane Bear’s skates and into the back of the net.

The goal with 5:14 remaining in the third period would be the difference between a second Minutemen win and a fourth consecutive conference home affair without a victory.

With just under three minutes to play in the third, forward Dominic Trento ripped a shot past Lekkas but failed to score the tying goal. Instead, Trento’s shot had hit the crossbar and bounced back into play before the Catamounts regained possession, leaving the junior center still goalless on the season.

“We were getting some momentum and finally getting a couple pucks toward the net,” UMass coach Greg Carvel said. “It’s just a real frustrating way to lose, but that’s what happens when you bring what we brought tonight.”

As always seems to be the case late in games, the Minutemen were awarded a man advantage on a UVM boarding penalty from Ori Abramson.

Just two shots on net resulted from the ensuing power play, as the Catamount defense extinguished any threat of a UMass comeback like they had earlier in the game.

Trailing 1-0 just 6:22 into the first period, the Minutemen evened the score with a Kurt Keats goal early on in the second period.

UMass tallied just six shots on goal in the second and third periods and just 14 in total in the game. UVM outshot the Minutemen by a 25-14 margin.

“(Vermont) checks very well, but it’s also a statement of our unwillingness to shoot pucks unless we are in a high scoring percentage areas,” Carvel said. “[They’re] a team that blocks shots and do a good job of not letting that puck get to the goaltender. It’s also a situation in the third period: we’re up in good shooting situations and we’re shooting pucks two feet over the net. It’s a combination of those things, but it’s a bad trend that we get out shot by a pretty wide margin most nights.”

Wischow stood on his head in helping keep his team in the game throughout. The freshman goaltender stopped 23 shots and had denied 13 consecutive attempts between the second and third periods before the late goal that put the Catamounts ahead for good.

“My job as a goalie for our team – we usually don’t start the best so we try and lock it down in the first five [minutes] – our guys usually play better after that. Obviously it’s disappointing,” Wischow said. “I want that last goal back. It’s tough. We weren’t getting a lot of shots but I thought we really had the momentum in the third. We were playing really well. It’s a tough play. I have to find a way to make a play through a screen and not give up rebounds like that.”

On a weekend that featured UMass’ first conference victory of the season, the combination of an inopportune goal and the inability to score one of their own ends the two-day stretch with a most unpleasant memory for the Minutemen.