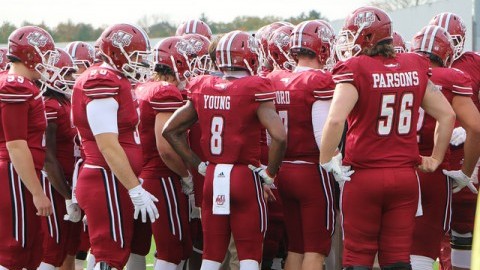 It might have come a bit later than the Massachusetts football team would have liked, but the Minutemen (2-8) enjoyed their much-needed bye week after playing a grueling 10-week schedule against some of the biggest and most physical teams in college football.

“They needed the bye week,” UMass coach Mark Whipple said after Tuesday’s practice. “We were a tired team against Troy, not to take anything away from them, but just looking at the guys the last few days has been night and day.”

Whipple added: “I just think the games took a little more of a toll than we expected. 10 in a row with the schedule we played is really hard, especially for the young guys. We’re playing a lot of freshmen; they’ve never been through this.”

So what did UMass do with its bye week?

“Well for us, a lot of the guys just watched football,” quarterback Andrew Ford said. “With all the traveling and playing, you don’t get to watch that much college football, and it was a good weekend to watch. A lot of good games, and I was able to watch some of my friends at their schools play, so that’s pretty much all we did. We got to put our feet up and relax and watch a lot of football.”

“Man, just a lot of sleep,” running back Marquis Young added. “Just trying to get our legs back under us, really just trying to focus on ourselves. For me personally it was a big deal because I’ve been down a lot this year. I just really wanted to take care of myself and take care of my body. I went to treatment a couple times.”

Linebacker Steve Casali, who’s been the lone Minutemen defensive player to start in all 10 games this season, said UMass’ defense desperately needed the time off with the amount of revolving bodies forced to play significant snaps with injuries in the front seven.

“Get everyone healthy,” Casali, who leads UMass with 84 tackles and is tied for second in the nation in fumble recoveries, said after last Thursday’s practice. “Get Downey healthy, get Teddy healthy.”

Casali added: “It really helped us, just to get away a little bit. It’s just healthy for the mind. Work on your academics and catch up on that. It was healthy for everyone.”

But as the Minutemen themselves were all enjoying their week off, UMass coaches spent the time traveling the country visiting recruits.

“The first part of it we went out recruiting as a coaching staff and came back on Wednesday night,” Whipple said. “We practiced Thursday, then gave the guys [the weekend] off, which we needed.

“We game planned when we came back and went to games on Saturday and Friday night and really recruited. We saw a bunch of guys across the country and locally so it was good.”

With two games remaining in the regular season in road trips against Brigham Young (Saturday) and Hawaii (Nov. 26), the Minutemen feel like the recharged batteries will help them not only in their final two games, but to give them something to build upon in the offseason.

In 2015, Young had his best game of his freshman year in UMass’ 31-26 win over Buffalo in its final week of the season, rushing for 240 yards with three touchdowns on 35 carries.

“Obviously we don’t have a chance to go to a bowl game this year, so just winning out these last two games is more of a pride thing and setting the tone for next year,” Young said. “Last year, it set the tone for the offseason and I wanted to be better this year.”

“A couple wins here would really boost us into the offseason program,” Ford said. “Get this program going in the direction it should be. For us, like you said, we’re just looking at this game-by-game basis. We’re not looking past BYU, but we need to finish this season strong.”