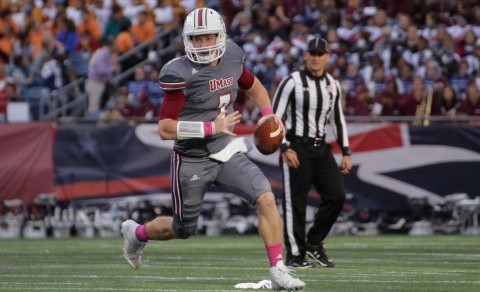 Trailing 40-26 with 12 minutes, 55 seconds remaining in the fourth quarter, the Minutemen (2-10) orchestrated a 16-play, 75-yard touchdown drive what ended in a 1-yard run from fullback John Robinson-Woodgett to bring UMass within one score.

Following a three-and-out from the Rainbow Warriors (6-7) on the ensuing drive, UMass answered with an 18-yard touchdown run from Marquis Young (19 carries, 117 rushing yards), which tied the game at 40 after Mike Caggiano’s PAT.

However, Hawaii, which clinched bowl eligibility with the win, answered with a 56-yard touchdown from quarterback Dru Brown to Keelan Ewaliko with 3:52 remaining.

The Minutemen were stopped on the Rainbow Warriors’ 21-yard line on 4th and 11 when Andrew Ford’s pass fell incomplete to Bernard Davis.

Trailing 24-13 at halftime, UMass overcame its Achilles heel for most of the year by scoring on back-to-back drives in the third to give the Minutemen their first lead of the game, 26-24, with 7:46 left in the quarter.

The first came via a 39-yard pass from Ford to wide receiver Andy Isabella, while Jalen Williams scored the second on a reception from 27 yards out.

Starting in nine games for UMass, Ford finished the season with 26 touchdown passes, breaking Blake Frohnapfel’s previous Minutemen-FBS record of 23, which he set in 2014.

The Rainbow Warriors answered UMass’ third-quarter scoring drives with a 16-0 run over their own. Hawaii forced a safety to tie the game at 26 after center Fabian Hoeller made a back snap from the Minutemen’s 11-yard line with 4:31 remaining in the quarter.

Brown connected with Dylan Collie from 31 yards out for his fourth touchdown pass with 2:28 remaining in the third quarter as the Rainbow Warriors regained the lead 33-26. One the first drive of the fourth quarter, Diocemy Saint Jude scored on a 40-yard touchdown run to give Hawaii a two-score lead.

Brown threw for 311 yards and five touchdowns on 22-of-30 passing attempts. Saint Juste lead the Rainbow Warriors’ ground attack with 122 yards on 14 carries.

Both teams exchanged scores in the second quarter with Hawaii opening the game on a seven-play, 74-yard scoring drive that lasted 3:49 after it received the opening kickoff.

Logan Laurent and Rigoberto Sanchez each hit 37-yard field goals in the opening quarter to give the Rainbow Warriors a 10-3 lead.

Adam Breneman scored his team-leading eighth touchdown reception with 13:58 remaining in the second quarter. Laurent also made a 38-yard field goal later in the frame.

Andrew Cye can be reached at [email protected], and followed on Twitter @Andrew_Cyr.