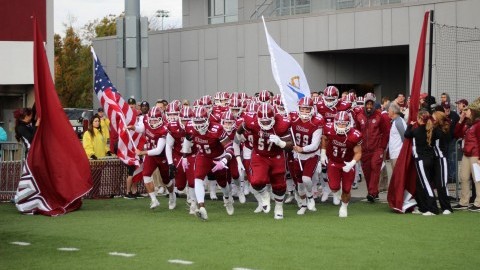 Trailing 28-24 early in the third quarter against Troy Saturday afternoon, the Massachusetts football team found itself in a spot the Minutemen have been in on many occasions this season; in striking distance against a heavily-favored opponent..

Coming off a big three-and-out on defense and an Andrew Ford to Jalen Williams touchdown connection, all the momentum was on the side of UMass (2-8) as it once again flirted with the impossible.

The Minutemen would keep the game within a touchdown until a 16-yard touchdown pass from John Johnson to Tevaris McCormick late in the third added on to the Trojans lead. A pair of touchdowns in the fourth would put the game away as Troy (7-1, 4-0 Sun Belt) pulled away for a 52-31 win over UMass at Veterans Memorial Field.

“We knew we were in the game. We knew this was a really good football team, so we knew we had to come out like we did to start the second half,” Ford told the Daily Hampshire Gazette after the game. “We cut it, and unfortunately it wasn’t enough.”

A major reason for the Minutemen’s second half struggles came because of mistakes made late in the third quarter and early fourth quarter. A fumble on a kickoff, turnover on downs and Ford interception on three consecutive drives all but sealed UMass’ fate.

Offensive production has never been an issue for Troy this season and Saturday’s matchup with the Minutemen marked the third time this season the Trojans have gone over 50 points in a game. As a team, they picked up 485 yards on the day, topping UMass, which had 360 yards.

Troy quarterback Brandon Silvers led the way offensively with 245 yards through the air, throwing for three touchdowns against the Minutemen defense with 12 different receivers having a reception in. UMass was able to contain running back Jordan Chunn to only 83 yards rushing – his third lowest yardage total of the season. Chunn came into the game 27th in the FBS in rushing yards.

Ford was strong once again for the Minutemen. The redshirt sophomore threw for 316 yards and three touchdowns on the day, upping his season total to 22. Tight end Adam Breneman was once again Ford’s favorite target, leading the team with six receptions and 13 targets.

Defensively, the Trojans took advantage of a UMass offensive line that was shuffled around due to an injury to redshirt freshman Jack Driscoll, as Ford was sacked five times on Saturday. Cornerback Blace Brown picked off his fifth pass in the game as well, putting him in a tie for the second most interceptions in the nation.

For the Minutemen, cornerback Isaiah Rodgers followed up his first career interception from last week against Wagner, with another interception against Troy. Linebacker Colbert Calhoun picked up a sack on the day becoming only the second player this season to sack a Trojan quarterback. The other was Clemson’s Carlos Watkins.

UMass has a bye next week and will then travel to Provo, Utah to face Brigham Young Nov. 19.