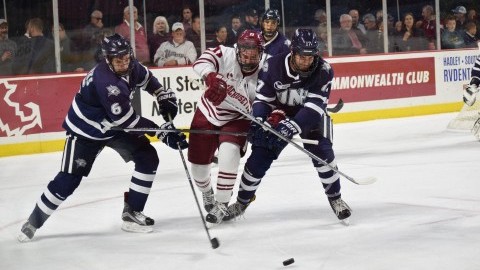 After hosting New Hampshire earlier this season, the Massachusetts hockey team will travel to the Whittemore Center this Friday to face UNH three weeks to the date of their first meeting.

On Oct. 28 –the opening night of Hockey East play—the Minutemen (3-5-1, 1-3-1 Hockey East Association) hosted the Wildcats in a 4-1 loss. A three-goal difference at the end of a game is significant, but UMass coach Greg Carvel is confident this time around will be different.

“I think we’ll look at Friday as a quick chance to repay UNH for beating us on our home ice on opening night of Hockey East play,” Carvel said. “We’re a different team than what we played them two weeks ago.”

While the sample size is small (just two games) the Minutemen have looked comfortable playing on the road so far. UMass has outscored both opponents by a combined 5-4, with a 3-1 victory over Merrimack this past Friday and a close 3-2 loss to Quinnipiac earlier in the season.

Carvel points to the physical characteristics of those rinks that helped UMass play to its strengths.

“I think the small ice surface is good for our team,” Carvel said. “It keeps the play in front of you and it allows you to recover quicker when you do make mistakes, and I think that was the case against Merrimack; we didn’t make a lot of mistakes and when we did, we recovered quickly.”

Carvel added: “That’s not the case against UNH; they play in a big ice rink, but we need to be on the road now [that] we’ve played enough home games. It’s what we need to do: grow as a team, and learn some things about ourselves on the road, and so far I’m pretty happy with the two games I’ve seen.”

The Wildcats (4-5-2, 2-1-1 HEA) and Minutemen combined for three power play goals in the first meeting—two for UNH, one for UMass—and it promises to be just as impactful this time around.

Two of UMass’ best defensemen—and future NHL players—William Lagesson and Ivan Chukarov often find themselves together on the ice for these penalty kill units.

“We’re really comfortable playing with each other,” Chukarov said.  “Me and him out there, it’s almost second nature to us at this point.”

Both Lagesson and Chukarov played on the same defensive line last year, allowing them to build the kind of chemistry that helps them now on the penalty kill.

They’ll have their hands full against a highly skilled power play for UNH led by senior forward Tyler Kelleher who leads the team with 17 points this season, 10 of which have come via the power play.

“He’s a good skill player. He’s a small, agile forward, but if we can get a body on him we should be able to keep him under control,” Chukarov said.

The penalty kill has been a point of pride for the Minutemen throughout the season, preached by the coaches and embodied by the players.

“It’s an important part of the game to kill penalties,” Lagesson said. “When you go on the penalty kill you have to be ready to do whatever it takes to kill it.”

“Ultimately penalty killing comes down to goaltending and sacrificing,” Carvel added. “It says a lot about our players that we have the third best PK unit in the conference. It’s a great statement.”

This sentiment will be put to the test in the rematch against a Wildcat team that is one of only three teams that have scored more than one power play goal in a single game against UMass.

Puckdrop is set for 7 p.m. on Friday.