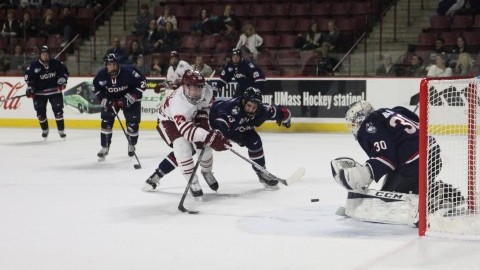 While the Massachusetts hockey team is still without its first victory in Hockey East play this season, both the team and its fans should be at least somewhat pleased with how the Minutemen (2-4-1, 0-2-1 Hockey East Association) looked Friday night.

UMass came away with its first conference point of the season in a 2-2 tie with Connecticut at Mullins Center, as the Minutemen finally put together not one, but two complete periods.

At first it appeared as though it was going to be more of the same for UMass as the Huskies (3-2-4, 1-1-1 HE) grabbed an early 2-0 lead in the first three minutes of play.

Minutemen forward Ryan McDougall was called for a hooking penalty 30 seconds into the first period to put UConn on the power play. Less than a minute into the game, Huskie forward Maxim Letunov recorded the first goal for UConn during the man advantage at the 55-second mark.

“It starts with the first shift of the game,” UMass coach Greg Carvel said. “We take a very poor penalty and they’ve got a good power play with some real high-end players and make us pay right away.”

Just over two minutes later the Huskies extended their lead to two when defensemen Miles Gendron scored from the slot on a 2-on-1 odd man rush.

Being out-shot 12-2 in the first period, the Minutemen couldn’t generate much offensive pressure. Freshman goaltender Ryan Wischow (20 saves) was forced to make a couple of impressive stops near the end of the first period keeping UMass in the game.

“I usually have a short memory – I’ve been playing goalie for a while,” Wischow said. “Some nights they’re going to score just bing-bing-bing and other nights they’ll never score. No matter what you just have to turn the page and move on.”

The first intermission seemed to awaken the Minutemen as they came out and played a much stronger second period.

Wischow would face only 10 more shots in the final 45 minutes of the game, with UMass keeping thei puck in their offensive zone for the majority of the last two periods and overtime.

“We just have to trust in what we do, and do it hard,” Carvel said. “I thought we did certain things in the second period better, I thought our defense gapped up better.”

Carvel added: “I thought we were more aggressive checking the puck and creating transition and then our cycle got going.”

The high volume of pressure finally paid off 7:56 into the second period when sophomore forward Austin Plevy notched the Minutemen’s first goal of the night on a power play with the puck slipping between UConn goalie Adam Huska’s pads.

“That was huge, especially for our power play,” Kurt Keats said. “They’ve been all around the net for the last couple of game and for them to put that one in I think it got us back into it.”

The third period started fast as both teams opened with scoring chances on either end of the ice. A shot from the Huskies rattled off the post in the first five minutes of the period that could have put the game out of reach for the Minutemen.

With 13:35 still left to go in the regulation, Keats chipped the puck past Huska to tie the game at two.

Wischow continued to stand strong during the five-minute overtime period making three timely saves as UMass and UConn each went home with a point in conference play. He managed to keep the puck out of the net for the Minutemen for the last 62 minutes of play, but credited the defense in front of him for holding up.

“I didn’t really hold them scoreless tonight it was the team,” Wischow said. “I faced maybe two more chances after (the first period), and in situations like that you just have to find a way to make a save and keep the team in it. When our defense gaps up and takes away space and forces them to shoot from the outside it makes everyone’s life easier.”

The Minutemen will have a week to prepare for their next game as they travel to North Andover to play Merrimack College Friday Nov. 11.