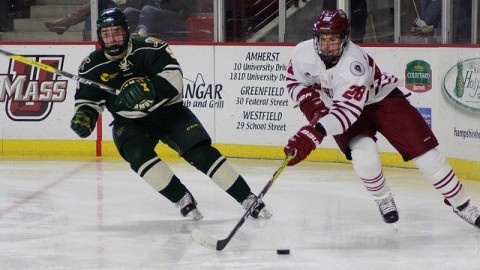 Hockey is a 60-minute game and if you aren’t ready to go for the full duration, wins are hard to come by.

A lethargic-looking Massachusetts hockey team struggled putting together a complete effort in its 2-1 loss to Vermont, Saturday night at the Mullins Center.

“I’m not sure,” Coach Greg Carvel said about his team’s repeated slow starts at home. “I think they have good intentions to come out strong. I think it might be a little that they’re afraid not to have a good start instead of just playing hard and playing right.”

UVM’s Rob Darrar scored his third of the season after line mate Brian Bowen intercepted UMass defenseman Callum Fryer’s D-to-D pass behind the net, and thread the needle to Darrar who banged it home to put the Catamounts up 1-0 just 6:22 into the first period.

Fryer’s defensive zone turnover highlighted one of a few for the Minutemen and it was one of their biggest weaknesses in the game.

“They really hound the puck in the offensive zone. There are certain teams that will give you more time and stay a little above the puck. UVM, they go. They force you into mistakes and they were doing that pretty early into the game,” Carvel said.

UVM outplayed the Minutemen for the remainder of the period and it showed in the shot department as the Catamounts registered 10 shots while UMass only mustered two. UVM finished the night leading 25-14 in shots over the Minutemen.

Sophomore forward Kurt Keats kept up his hot-streak at home after tallying his third goal of the season 2:43 into the second period.

Sophomore defenseman William Lagesson fired a low wrist-shot on net and Keats got a piece of it with the blade of his stick, redirecting it past Catamount goaltender Stefanos Lekkas (13 saves), to tie the game at 1-1.

“I’m just trying to bring as much energy and intensity as I can each shift and get the boys going,” Keats said.

Led by the fourth line of Keats, freshman Griff Jeszka, and junior Anthony Petrella, UMass seemed to have settled in after Keats’ goal.

“We pride ourselves in being the hardest working line on the ice,” Keats said. “We were pretty good tonight and I was happy with those guys.”

Freshman goalie Ryan Wischow (23 saves) got the start in net for the Minutemen, and had to make a couple athletic saves including a paddle save halfway through the third to keep the game knotted at one.

It looked as though the game would be headed to extra-time until UVM forward Matt Alvaro snuck one through after Wischow misplayed the initial shot at 14:46 of the third.

“He shot it through the defenseman’s legs,” Wischow said. “The rebound popped out, (Alvaro) shot it and it deflected off our guy’s skates through my legs. I have to control my rebounds and find a way to make a save that late in the game. It’s killer. It can’t happen.”

The Minutemen had one final power play opportunity with less than five minutes left in the game, but after failing to convert UMass dropped their final game of the weekend.

Both teams finished 0-5 on the power play with the Catamounts generating four shots on the man-advantage while the Minutemen could only manage two.

“I thought we were sluggish mentally and physically, but I thought the kids competed as hard as they could, just didn’t have a lot of jump tonight,” Carvel said.

Next up for UMass is a trip to the Granite State as the Minutemen battle New Hampshire for the second time this season on Friday Nov. 18. Puck drop is scheduled for 7 p.m. at the Whittemore Center.