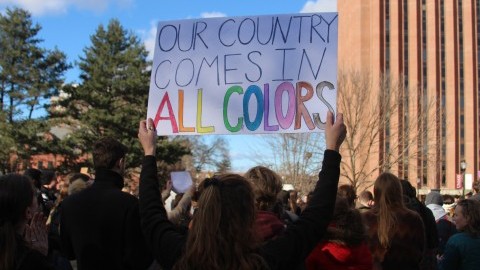 Approximately 150 members of the University of Massachusetts community attended a public forum to discuss the results of the 2016 election on Thursday night in the Campus Center Auditorium.

The forum, titled “Election 2016: What happened? What is likely to happen?” was held in response to Donald Trump’s victory in the 2016 Presidential Election, which has sparked social outcry and protests all over the country.

Provost Kathy Newman introduced the public forum by emphasizing the need of unity and respect during this time.

“Regardless of the election’s outcome. The core values of this university have not changed a bit. We remain wholly committed to the principles of diversity, inclusion and respect for all, and we will continue to foster a campus community that is welcoming to everyone. With a particular emphasis on ensuring that vulnerable students and community members feel safe and valued,” Newman said.

La Raja focused the bulk of his talk on political parties and governance.

“I know none of what I’m saying is comforting to all you progressives out there. I’m talking about smoke filled rooms, party money, lobbyists running government. But I have to tell you as a political scientist by my study of the institution such things are lubricants of effective governments by a society that is so large, diverse and divided. We need some more transaction of politics and institutional gatekeepers who take the long view,” Raja said.

Several members of the audience expressed fears of being physically harmed in the wake of Trump’s election.

Chair of Journalism Kathy Forde spoke on the shortcomings of the media in this election but also why the blame shouldn’t fall solely on the shoulders of the news media.

“It’s on all of us, the news media and the public,” Forde said. “A lot of the responsibility truly is in our education systems to help young people from a very young age all the way through their education to learn about the news, how it works and to be literate in news and media.”

Chuck Gillies, 82, a retired teacher and school administrator who voted for Clinton believes the reason for Trump’s election victory was poor voter turnout.

“Where was the loss of voter turnout? It was on the progressive side. I’d just like to know how many people in this audience actually voted,” Gillies said. “The reason that Trump won was the failure on the left hand side to get the turnout they needed.”

The 2016 Presidential Election saw national voter turnout reach a 20 year low as only 55.4 percent of eligible voters cast their ballots according to CNN.

Not all members of the community felt that the forum addressed some of the major issues of this year’s election.

Graduate student and sociology major Rodrigo Dominguez-Villegas thought the forum lacked enough focus on the role that white supremacy and racism against targeted groups played in Trump’s election win. Dominguez-Villegas indicated that it would be useful to have another forum focus on those issues of race and power in this country.

Both UMass and the town of Amherst have seen social unrest and protests in the wake of last Tuesday’s election.

Approximately 200 individuals protested at Goodell last Friday afternoon in response to Donald Trump’s election win and about 350 community members and students at Amherst Regional High also expressed their opinions and concerns by having a walkout Monday.

Chancellor Kumble Subbaswamy sent an email to the UMass Campus Community announcing that the forum would be held “to better understand the challenging issues that we face in the months ahead.”

“Protests, too, may continue on this campus and elsewhere, and such actions are a longstanding part of our commitment to free speech. I know our faculty and staff will also remain focused on their roles and responsibilities as instructors and advisors in the daily operation of the university in the days ahead,” Subbaswamy wrote.