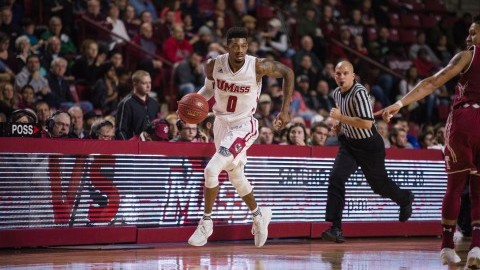 Thursday night’s win for the Massachusetts men’s basketball team is one it will sure remember – and potentially build upon for the rest of the 2016-17 season.

Was it sloppy for the majority? Yes. But despite all the up and down’s throughout, UMass and its young core got its first taste of a nail-biting victory, holding off Temple 70-67 at Mullins Center in a renewal of an old Atlantic 10 rivalry game.

“We’ve got some spurtability, but we also have some mistakes.”

UMass (2-1) found itself in a similar situation against Temple (1-2) as it was in its last game Monday night against Mississippi.

Although the Minutemen blew a late nine-point lead after failing to make a field goal in the game’s final three minutes, 49 seconds versus the Rebels, the Minutemen and Temple battled neck-and-neck in a one-possession game for the final 17:07, as neither team held more than a three-point lead at any point during that stretch.

“We’ll be tested like this later on during the season,” UMass forward Seth Berger said. “So to prove that we have the grit and the toughness and to win that game is huge”

After Rashaan Holloway threw an arrant pass out of bounds intended for Luwane Pipkins with 1:08 remaining and the game tied at 65, Kellogg went with a four guard rotation (Pipkins, DeJon Jarreau, Donte Clark and Zach Lewis), moving Berger to the center position to matchup with Owls forward Obi Enechionyia, who scored a game-high 26 points.

With the Minutemen trailing by two and only 34 seconds left on the clock, Jarreau provided the heroics for UMass scoring a go-ahead 3-pointer to give it a 68-67 lead. Following a missed 3 from Owls Daniel Dingle, Jarreau caught a long outlet pass from Pipkins for an easy layup to secure the win.

“I’m proud of the guys after a heart breaker down in Ole Miss to at least come back and show some fight and toughness against what I think is a really good team that is going to continue to get better,” Kellogg said. “Balls were kind of bouncing all over the place and today, unlike the last game, they bounced in our favor.”

Despite assisting on 17-of-27 total field goals, the Minutemen looked out of control for long stretches against the Owls, as UMass turned the ball over 18 times. Clark had five of his own, while Jarreau, had three himself.

Although Jarreau was getting to the basket with east for most of the night, he did force some bad shots while attacking the rim, even burning a tire and falling over on a few different instances.

“I’m still working on that,” Jarreau said of playing too fast at times. “Sometimes I do tend to get out of control and I just have to work on that as the season goes by and as my basketball career goes.”

“He burned out of his shoes like three times,” Kellogg said immediately following up Jarreau’s statement.

In addition to limited turnovers, Kellogg also felt UMass needs to improve its pick-and-roll defense, as well as its free throw shooting. The Minutemen finished 9-for-17 from the free throw line (52.9 percent), however made 2-of-7 in the second half. Holloway, Clark and Pipkins were the only three players to attempt free throws for UMass.

“I mean the pick-and-roll defense is definitely needs some work,” Kellogg said. “That’s something that, in the time we’ve had before this game, we have a couple different covers we are trying to use – what’s the best way for Rashaan to play ball-screen defense. And honestly, the younger guys – (Jarreau) included – they aren’t physical enough yet to push up and get over (the screens), but we’re working on that.”