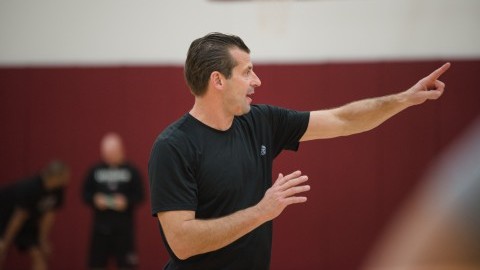 When the Massachusetts men’s basketball team takes the Mullins Center court Friday afternoon for its season opener against in-state rival UMass Lowell, it will do so without the familiar faces of Trey Davis, Jabarie Hinds and Tyler Bergantino.

Rather, the likes of DeJon Jarreau, Unique McLean, Tyrn Flowers and Chris Baldwin – who make up a top 30 recruiting class – will begin their collegiate careers.

Brison Gresham, who’s also a part of the 2016 recruiting class, has not yet been cleared by the NCAA.

The loss of Davis and Hinds leave the Minutemen without two of their top three scorers from a year ago. Donte Clark, who averaged 16.1 points per game last season, returns for his junior season after finishing second in scoring for UMass in 2015-16.

Not only is Clark expected to once again serve as one of its top scorers, but he also will be one of the upperclassmen looked at to lead a fairly young team.

Clark said he has not felt overly pressured to make sure that underclassmen are prepared for the season.

“I think that they take the pressure off of me because of how good they are,” Clark said. “I know that they’re still young, but they definitely got the talent or whatever to kind of break some of that youngness off.”

Clark added that the amount of young talent has contributed to the teams overall depth.

“I would say our depth,” Clark said is UMass’ biggest strength. “Because of all the players we got and everybody can score and stuff like that, so we’ve really been focusing on playing defense and making sure we lock down our defenders and stuff like that.”

The River Hawks enter Friday’s game returning all three of its top three scorers from last season. Guards Jahad Thomas (413 points scored),  Isaac White (334) and Matt Harris (282) are all expected to play a major role for UMass Lowell this season.

Minutemen coach Derek Kellogg has expressed how challenging it has been to teach the team “how to play this game the right way,” and looks at the matchup against the River Hawks as an important step to improving.

“I think it’s important because Lowell is a team that shoots a lot of threes and is capable of getting on a run a knocking down some baskets and making the game really hard,” Kellogg said. “So I think if we can come out and really just do the right stuff. I think that if our team plays at a high level on the defensive end of the floor and just makes the right plays offensively that we’ll have a chance to win a lot of games this season.”

Since the team started practicing, Clark has been surprised with how many different players have stepped up during the preseason.

“I would say like Malik (Hines),” Clark said of who’s played well. “The other day he came out killing – him and Rashaan were going at it. And the other day (Jarreau) was killing it as far as on the offense and stuff. And then the other day, Luwane was locking up full court and had four steals in the backcourt. It’s been different people.”

Kellogg said he’s reached out to his former coach and mentor, and current Kentucky coach John Calipari for advice on how to prepare and teach a team full of talented freshmen.

“I’ve talked to coach (Calipari) and some other guys who’ve been through it,” Kellogg said. “And it’s a little different when you’re dealing with five one-and-done’s or six one-and-done’s than guys who are going to be here a while.”

Kellogg added: “But we had to set the foundation with this group early on, you know, even things as simple as how you run to the huddle and ‘you can call a time out on the floor, you can’t. You can do A, B, C.’ There is a lot of things that I think the average fan just takes for granted and they should because obviously that’s not there job.”

Despite having a lot to learn as Kellogg has mentioned, Clark does not believe it will take long for the Minutemen figure it all out.

“I think they pick up fast so I think once we get to play a couple of games they’ll eventually see the speed of the game and how hard they have to play.”

Tipoff at Mullins is set for 4 p.m.