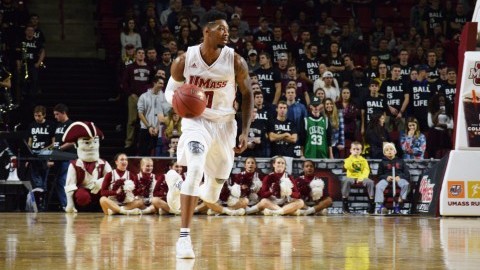 For 31 years, the Massachusetts men’s basketball team and Temple faced off against each other every year in one of the oldest rivalries in the Atlantic 10.

But since the Owls moved to the American Athletic Conference prior to the 2013-14 season, the two haven’t faced off against each other since the 2013 A-10 quarterfinals, with only Temple’s Daniel Dingle being on either team’s roster for that game.

“I think the fans around here at least know the name of Temple and remember the Cage and the (John) Calipari and (John) Chaney days,” UMass coach Derek Kellogg said after Tuesday’s practice. “

“We had some really good games with them even in my tenure before they bolted for the American (Athletic Conference). So I think it’s a good rival game, I think it’s a really good RPI game for both teams, it’s a game that has national relevance, per say. It’s one where I think either team can win, which is a good place to be in.”

The Owls (1-1) enter Thursday game in similar fashion to UMass, splitting their first two games of the season. Temple opened up 2016-17 with an overtime win of Philadelphia Big 5 opponent La Salle, before falling to New Hampshire 57-52 Monday.

“I think they’re in the same boat as we are,” Kellogg said.

The Minutemen (1-1) are coming off their first loss of the season after blowing a late second-half lead against Mississippi Monday night on the road.

Through the first two games of the season, it’s been UMass’ freshman guards who are leading the charge on both ends of the ball. Luwane Pipkins, who leads UMass with 16 points per game, also ranks first in the NCAA in steals (12), and is tied in steals per game (6). DeJon Jarreau finished with 25 points, eight rebounds and six assists against the Rebels, doing so by attacking the basket and getting to the free throw line.

“It’s good because me and [Pipkins], we play good together – none of us have been selfish with each other,” Jarreau said. “We’re passing the ball and we’re just playing all game and we’re just trying to help the team win.”

“It helps me a lot,” Pipkins said of playing with Jarreau, who’s also a point guard. “If people are paying more attention to me, he can score or I can pass and shoot and then vice versa.”

Through two games this season, the Owls have used only a seven-man rotation, headlined by Obi Enechionyia (20 points per game, 10.5 rebounds per game), Dingle (17 ppg) and Shizz Alston Jr. (10.5 ppg, five assists per game).

With UMass still experimenting with different roster combinations early in the season, Kellogg wants to take advantage of the Minutemen’s depth to wear them out with full-court pressure.

“I like to do that with anybody we play,” Kellogg said. “They’re tougher than most teams to get out of their style. I think coach (Fran) Dunphy has played a certain way for a long, long time.”

“To get them out of their style is tough – they have four, and even five (ball) handlers on the court at all times,” Kellogg added. “They’ll play faster than they have in years past because they have more guards that can handle.”

Jarreau also feels UMass needs to get up and pressure the Owls guards early if the Minutemen want to avoid falling below .500.

“We need to try to get them tired fast and then we can run away with the game if they’re only playing seven players,” Jarreau said. “We have a full team and everyone can play, so different people will come in with fresh legs and force more pressure.”

Thursday’s game at the Mullins Center is set to tipoff at 7 p.m.