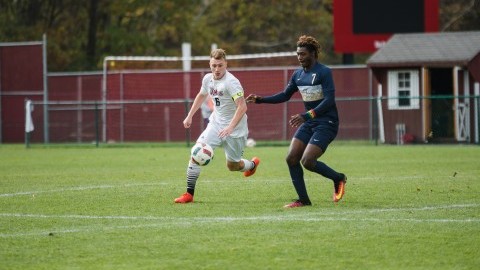 The Massachusetts men’s soccer team is postseason bound, as it sealed a spot in the Atlantic 10 tournament with a 2-0 victory over the Fordham Wednesday afternoon.

“We were picked to finish in 10th place in the A-10 in the preseason,” UMass coach Fran O’Leary said in a phone interview after the game. “To clinch a playoff berth a terrific accomplishment. (The team) deserves it. The seniors have really stepped it up for us.”

After a scoreless first half, the Minutemen (7-7-3, 4-1-2 A-10) offense came alive in the second. Both of their goals came off set pieces, an area the team continues to improve on.

O’Leary was happy with the way his team executed set pieces throughout the game.

“That’s played a big part in us,” O’Leary said. “The quality of the service is good and the boys are hungry to attack the ball. We had some good opportunities today.”

It was the defense who once again stepped it up for UMass. Goalkeeper Jorge Becerra, who was recently named A-10 defensive player of the week, didn’t let a goal get past him. This is the sixth time in the last eight games the Minutemen keeper has had a clean sheet.

O’Leary see’s Becerra’s play as the reason the team continues to win games.

“The team that keeps clean sheets and stops the opponents from scoring will win the game,” O’Leary said. “That’s played a huge part for us lately.”

This game was a physical contest with the referee consistently blowing the whistle for penalties. Fordham committed 13 penalties throughout the game to UMass’ nine. Tim Steuk, Rashid Nuhu and Matt Miller all received yellow cards for Fordham, while Casey Hamill received one for Minutemen.

“When you’re playing against a really good team it happens,” O’Leary said. “It was a hotly-contested game with two good teams competing. They were the second place team (in the A-10 conference). It was the regular intensity of a conference game.”

The Minutemen take on La Salle in their final regular season contest this Saturday at 1 p.m. in Philadelphia.