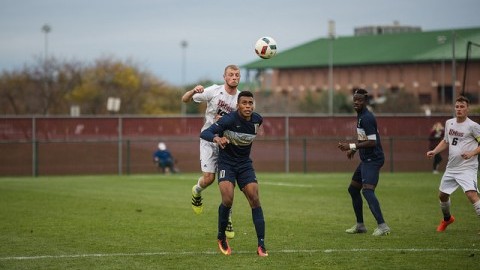 Two weeks into the 2016 season, the Massachusetts men’s soccer team was 0-5-1 and looked to be doomed. After an Atlantic 10 tournament berth the season before, expectations were high, but without a win midway through September, another postseason run looked improbable.

Nearly two months later, UMass (7-8-3) has finished as the fourth seed in the A-10 tournament. Veteran leadership and one of the best defenses in the conference propelled the Minutemen to finish the season on a 7-2-2 run.

Head coach Fran O’Leary’s team is eager for this coming Thursday, when they will play fifth-seeded Virginia Commonwealth in Davidson, NC in the first round of the tournament.

“There’s a lot of excitement, that’s for sure,” O’Leary said. “Not many people saw us going back to the tournament, so to finish fourth with the lowest goals against average in the conference is great for our guys. We’ve got to go down and enjoy this experience, and bring our best game against VCU.”

Only two weeks removed from their last match, there is a good deal of familiarity between the two teams.

UMass first played VCU on Oct. 22, when a header from senior defender Josh Jess found the back of the net to seal a 1-0 overtime victory. It was the fifth shutout of the season for goalie Jorge Becerra, who allowed just five goals in the final eight games of the regular season. The victory gave the Minutemen the edge over VCU for the fourth tournament seed.

“Our veteran leaders have been terrific,” O’Leary added. “We’ve relied a lot on Jorge [Becerra] in the back. JJ [Josh Jess] and Konrad [Gorich] have formed a very good partnership. Brandon [Merklin] and Casey [Hamill] continue to shut down their sides, but those guys would be the first to compliment the front six for taking a good chunk of the workload off of them.”

Like the Minutemen, the Rams began their season well below expectations.

After reaching the conference championship game in 2015, VCU was just 1-5-0 through its first six games. Midfielders Luc Fatton and Jorge Herranz combined for 32 points in the regular season to help right the ship, and the Rams finished first in total points (78) and points per game (4.33) in the A-10.

“We’re going to have our hands full,” O’Leary said of VCU. “They’re a very well coached team, and they’re a very talented team. All their players are comfortable in possession, so we’ll have to be on our guard. Our concentration has to be high and our zones have to be tight to hopefully keep them off the scoreboard.

With a 4-2-2 record in conference play, the Minutemen played their best soccer against conference opponents. The strength of the back line and Becerra have been essential to success for UMass, and its consistency is crucial entering the tournament.

How the defense stands up to VCU’s high-powered attack will determine the game’s outcome.

This is the first time the Minutemen have qualified for tournament play in back-to-back seasons since 2007 and 2008, which saw UMass win the 2007 title.

Henry Brechter can be reached at [email protected] and followed on Twitter @HBrechter. .