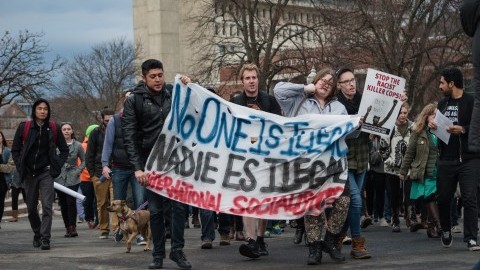 On Nov. 16, over 600 students and community members came together at the University of Massachusetts to protest President-Elect Donald Trump and push the administration to make the University a sanctuary campus.

UMass is one of over 100 campuses nationwide that participated in walkouts to show solidarity with undocumented immigrants on Wednesday.

The protest on Wednesday was student-organized, in accordance with the Movimiento Cosecha’s (Cosecha Movement) #Sanctuary Campus.

According to the event Facebook page, a sanctuary campus means the University will “not comply with existing and future governmental requirements and pressures to identify and endanger the safety and security of anyone in our community in connection with their status as immigrants, undocumented or otherwise.”

The event began at 3 p.m. outside of the Student Union. Speeches were given by the organizers to start off, and 600 copies of the letter of demands to be brought to Chancellor Subbaswamy’s office regarding making UMass a sanctuary campus were passed out to attendees.

Santiago Vidales, a Ph.D. student studying Hispanic literature and linguistics and one of the organizers of the event said, “I’m an immigrant, my family is a family of immigrants. I did [march] because it’s important to me.”

Organization of the march was “very ad-hoc.” “We heard the call nationally that sanctuary campuses is something we need to be looking into,” said Vidales.

The list of demands for Chancellor Subbaswamy and Provost Newman ask that the University become a sanctuary campus and that “UMass Amherst will release a statement by Friday, November 18, 2016, 3:00 p.m. laying out a plan to achieve these protections on our campus.”

Vidales said, “If that’s not the case, they’ll release some boiler plate language and we’ll have to come back protesting.”

“I just feel like it’s important that our campus community makes a clear statement that we don’t support the kind of hateful rhetoric that Trump had in his campaign,” said David Ruymen, a senior history major.

“I personally feel like Trump, rather than running on issues, seems to run against identities and against groups of people. I think that’s really damaging, and I think that it’s important that we kind of repudiate that kind of political strategy and say that that’s not okay and it should be more about coming together and trying to celebrate our differences.”

After organizing at the Student Union the crowd marched to Goodell Lawn, where more speeches were given.

Anna Waltman, an English Ph.D. student, read a letter from Lin Geng, an undocumented immigrant and organizer of the Pioneer Valley Workers Center.

“We are the people who work over 12 hours a day to keep the hotels and rich people’s mansions clean, to feed rich people’s kids with delicious food and to avoid having our kids drop out of school. We are the people who serve food to the customers, while they experience discrimination, racism and sexism, behind the kitchen door making four dollars per hour. We do the dirty jobs, support the economy and make other people’s lives better,” read the letter.

“At least 200 incidents of harassment, assault, or violence per marginalized people have taken place since election day…at least eight trans youths have committed suicide since election day, people are dying every single day,” said Josh Odam, a member of the UMass Board of Trustees and a senior political science major.

“Today around eight o’clock I spoke with President Meehan from the Board of Trustees, and the student trustees introduced the necessity of turning the entire UMass system into a sanctuary system for undocumented students. And he was accepting of the idea, the board was accepting of the idea, he was stating that the university does not prosecute or go after or try to collaborate in persecution of undocumented students. But that’s not enough. We need his unequivocal statement to say that the University of Massachusetts will not stand for xenophobia, or hatred, and will protect their undocumented students, and we will not go anywhere until we get that statement.”

The crowd marched from Goodell Lawn to Whitmore at the conclusion of those speeches, where they would march silently in two lines into the building to leave their signed letters of demands on the Chancellor’s desk.

Emmalie Dropkin, a graduate teaching assistant in the writing program at UMass, said that she knows some of her students are international, and while she is unaware of their legal status, she participated in the walkout because she wants all of the students on campus to feel safe.

Bahiya Nasuuna, a senior public health sciences major present at the protest said, “I didn’t want to stand aside idle, I didn’t want to be that person that just lets the silence be how I’m responding to this. Because if you respond in silence then you might as well stand for Trump and all that he stands for, so I just wanted to actually be a part of something and be a part of this community.”

“If we can turn our university into a sanctuary campus, that’s something that’s direct, immediate, that we can do for undocumented international refugee students, workers, and staff…It’s here, it’s real,” said Vidales.

Gender Liberation UMass (GLU) has been hosting “Sh*t-In at Whitmore” this week to fight for gender neutral bathrooms across campus. Toward the end of the walkout, Justin Kilian, a senior social thought and political economy and women, gender sexuality studies major said a few words about the progress of this movement.

“We organize for the very elementary rights of trans students on this campus…We have come to tentative agreements with the administration due to our actions. Liberalism is a cloud that fogs everything,” said Kilian.

“We must not be satisfied, we must not give in until anyone, and I mean anyone and everyone can walk around this campus without fear, without anxiety, without reasonable suspicion, and without the fear of being harassed, of being assaulted, or otherwise emotional, physically, or mentally put in danger.”

The protest concluded with an open-mic, giving a few people in the crowd a chance to express their feelings and with one of the speakers telling the crowd to text the word “sanctuary” to a number for Movimiento Cosecha, an organization fighting for the protection of the immigrant community.

Those who participated in the event were encouraged to return to Whitmore on Friday at 3 p.m. to pick up a statement from the Chancellor about plans for the sanctuary campus.

Hayley Johnson can be reached at [email protected] and followed on Twitter @hk_johnson.