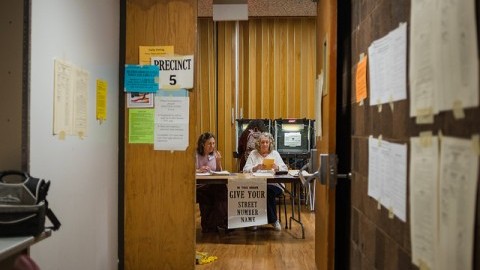 University of Massachusetts students and Amherst residents expressed a range of opinions on the presidential candidates and ballot questions after casting their votes on Tuesday.

Daniel Gately, a senior communication and Spanish major, is a former Bernie Sanders supporter who voted for Clinton in order to vote against Trump. He hoped that Clinton could win over other disgruntled Sanders supporters.

“I was a diehard Bernie supporter like a typical millennial, but I kind of decided that the best way to push the progressive agenda would just be to get Clinton in office,” Gately said. “And then after she’s in office, I’m sure that the Sanders supporters will come back to fulfill on the things she’s talking about.”

Gately originally planned to vote for Jill Stein, but after listening to people around him and even Sanders himself, Gately arrived to the conclusion that a protest vote was not an appropriate option.

“I decided that Clinton was the only logical choice because a Trump presidency would just be a disaster,” said Gately.

“I am dissatisfied with both the candidates, depressed with the Republican Party,” said Quarles, 87, who has been an Amherst resident for 44 years. “The winner will definitely be Hillary. I would be frightened if Trump won.”

Jose Reyes, a sophomore kinesiology major, voted for Clinton because of her policy on affordable colleges.

“Right now, for my physical therapy career, I’m going to be in a lot of debt when I’m out, so it would be nice to get as much help as I can,” Reyes said.

Sophomore mechanical engineering major Nicholas Labodycz supported Donald Trump. “I voted for Trump and Pence,” he said. “I am hoping that Trump will bring in some new ideas. We have had the same type of system for a really long time and I am hoping something different will happen in our government.”

“I think that there should be more third-party representation in this country and I do not want to vote for either Hillary Clinton or Donald Trump,” Moschella said. “On a lot of issues, I agree with [Johnson]. Marijuana legalization, civil liberties, size of government.”

John Guttadauro, a senior computer science and psychology major, voted for himself for president. His decision was formed from his discontentment with the four candidates running for office. Guttadauro said he could not support Clinton due to her “Manhattan-like project” to break encryption.

“In computer science, just coming from that… I can’t vote for somebody who supports that,” Guttadauro said. “[Trump] is running on hate and I can’t vote for that either…I couldn’t make myself vote for any of them for my first election, so I voted for myself instead.”

He added that a major reason he came out to vote was to vote yes on Question 4, which would allow the use of marijuana by people age 21 and over.

“The economic incentives are too great to ignore for what you see in Colorado and other places,” Guttadauro said. “So, I think that we should get in on that now before the other states start to legalize it so we can be a distribution center and make a lot of money in Massachusetts.”

Daniel Gately also voted yes on Question 4 because the initiative has the potential to lower the rate of drug-related incarcerations, he said.

“I’m just happy that if [Question 4] passes, we won’t be using marijuana as a way to lock people up in prisons for such a simple drug charge,” Gately said.

For many, the ballot questions were not easy decisions. Amherst resident Lisa Katz, who came to vote with her daughter, had a hard time reaching a decision on Question 5. “I was torn all morning, and then I voted yes,” she said.

Question 5 is a local ballot question that would raise property taxes to fund a new school facility that would replace two smaller Amherst schools.

“I believe in the smaller schools, especially for kids,” said Jose Reyes, who voted no. “It’s a better way to learn.”

Junior chemical engineering major Dan Kallin voted no on Question 2, which would raise the cap on Massachusetts charter schools.

“I think expanding charter schools will take away from public schools, despite what people say,” Kallin said.

“My parents have seen all the good that charter schools can do by taking these kids who could have been delinquents out of these terrible public schools and putting them in better school systems,” Terrio said.

Terrio argued that charter schools provide healthy competition in order for public schools to improve, and also provide students with alternatives in their education.

“I love [teachers’] unions, but I hate when teachers get comfortable after having tenure and then they don’t do much anymore,” Terrio said. “If that’s happening in the public school system, you have the option to take your kid out and put them in a charter school.”

Joel Inbody, a graduate student in sociology at UMass, voiced strong support for Question 6, a non-binding question that would lower the drinking age for beer and wine to 19.

“As for Question 6, lowering the drinking age, I feel that that is just a give in at this point,” he said.

Gina Moulton, a UMass alumna and local teacher, voted no on Question 6.

“I voted no on 6…I have two young children, I think if I didn’t have young children I might have voted yes. Kids are drinking anyways, but I worry about younger teens on the road under the influence,” she said.

Inbody added that he didn’t feel obligated to vote on quite everything this election cycle, explaining:

“There was a number of Congress people that I just didn’t have any knowledge of or connection too,” he said. “I don’t want to guess to vote, unless I feel I agree with the person fully.”

Karlea Peterson, a junior at Amherst College studying geology, discussed her hopes for the future following the election.

“What I hope is people use this election to see that we need to make changes before things get to the state where it is right now,” she said. “Everyone is kind of down about this election… I hope the things that come from this will be more forward-motioning into the future rather than just reacting to the situation that is given to us.”