UMass students react to results of the 2016 election 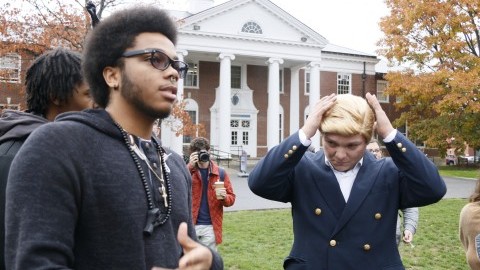 University of Massachusetts students expressed a range of opinions as the results from the 2016 presidential election were released.

Some students were unhappy with the outcome of Donald Trump taking the presidency.

“I am very shocked,” said Natalie Senior, a junior psychology major. “Growing up in a Democratic area, it’s hard for me to believe that half of the country can support such a terrible, ignorant person to lead our country.”

“For me personally, as a gay male, it is somewhat terrifying due to the fact that it can really revoke some of my rights,” said Adam Celikmen, a junior kinesiology major.

Though some UMass students considered themselves to be Republicans, many were still unable to support the victory of the Republican candidate.

Leigh Pastorella, a sophomore political science major and Republican, could not bring herself to support Trump.

“I’m not surprised Trump won,” Kelley said. “A lot of people like myself have been supporting Trump over the months but were just too afraid to come forward with it.”

Students also reacted to the outcomes of Question 1 and 2. Question 2, which did not pass, would have authorize the approval of up to 12 new charter schools or enrollment expansions in existing charter schools by the Board of Elementary and Secondary Education per year. Question 4, which did pass, will legalize recreational use of marijuana for people 21 and over.

Some students responded positively to the outcome of Question 2.

“As someone who wants to go into education, I think it’s important for every single child to be able to receive a good education and money needs to be put toward improving the public school system too,” Senior said.

“Instead of adding more funding to public schools, you would be taking away from them,” Celikmen said. “I understand people in certain areas wouldn’t want to attend a public school but it isn’t a solution to the problem.”

Some students also supported the outcome of Question 4.

“I think alcohol has much more harmful effects than marijuana and obviously alcohol is legal if you’re 21,” Senior said.

“I think it’s going to be a great thing for our government,” said Victoria Knipe, a junior resource economics major.

Some students disagreed to the approval of Question 4.

“We don’t know the effects it has on brain development yet,” Pastorella said. “There needs to be regulation.”

“I think it should just stay medical,” said Emily Thompson, a senior public health sciences major. “It’s a way for people to just stay under the influence and not contribute as a member to society.”

Jessica Valeriani can be reached at [email protected]