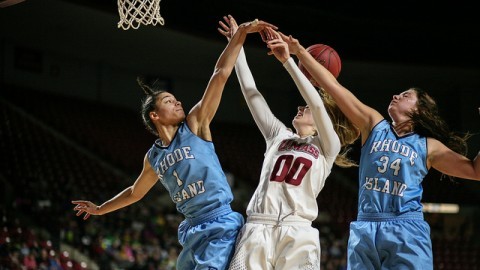 Maggie Mulligan battles against two URI players for a rebound in a game this past January. Shannon Broderick/Daily Collegian)

The Massachusetts women’s basketball team opened the 2016-17 campaign with a 61-47 loss at Buffalo on Friday night with new coach Tory Verdi’s first game at the helm.

UMass (0-1) quickly fell into a 14-0 hole just three minutes into the game and could not recover. The Minutewomen drew within four points of the Bulls (1-0) with over seven minutes remaining in the fourth but ultimately fell short.

“I thought we did a lot of good things for being our first time on the floor,” Verdi said. “I thought defensively we were really good. The fact that we turned Buffalo over 25 times, they’re a seasoned club, and we did a really good job in that regard.”

Verdi attributed Buffalo’s early run to the Minutewomen’s inexperience. Freshmen Hailey Leidel and Ryan Holder, along with sophomore Jessica George, all made the first start of their college careers on Friday.

“I just think when you look at it, there’s three players on the floor that had never played a game,” Verdi said. “I just think that it was just one of those situations where the game was happening really, really quickly for them.”

Leidel shined for the Minutewomen in her collegiate debut, leading the team in points with 16 and tying for the team lead in rebounds with seven.

She showed off her range on offense, shooting 4-10 from beyond the arc, and contributed four steals on defense.

Verdi had high praise for Leidel after the guard’s strong debut.

“She’s probably our most talented player when it comes to the offensive end just because she can shoot the three, she can shoot midrange, and she can get to the basket, so we need her to score,” Verdi said.

Leidel also turned the ball over seven times, a product of playing her first game at the college level.

Holder impressed as well in her first college game, also tallying seven rebounds to go with 13 points as the only other Minutewoman to hit double digits in scoring.

“Ryan’s done a terrific job for us. She’s very aggressive offensively where she puts the ball on the floor and she gets to the rim, and she has to be aggressive for us, she’s got to be able to finish for us, and we expect that from her,” Verdi said.

UMass will be back in action on Monday night at 7 p.m. against North Dakota State at the Mullins Center for the Minutewomen’s home opener.

“It’s another game, it’s another opportunity for us to go out there and get better,” Verdi said. “You know hopefully we learn from the mistakes that we made the other night and I just want to see us go out there and compete and outwork our opponents.”

Verdi hopes to see the lone returnees from last season currently playing, Maggie Mulligan and Leah McDerment, to contribute more on the offensive side of the court.

The two juniors combined for just five points and Mulligan fouled out of the game midway through the fourth quarter.

“We need Maggie Mulligan to score around the basket for us a little bit more and same thing with Leah and I feel like if we go out there tomorrow night and those guys give us a bit more offensive production, we’re going to put ourselves in a position to win a game,” Verdi said.