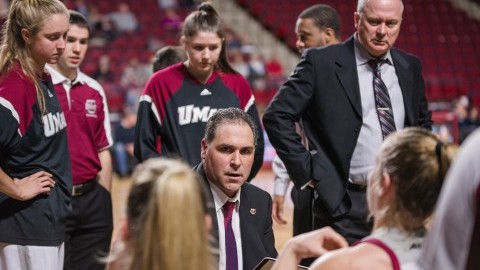 The Massachusetts women’s basketball team is on the road this week, making the trip to Iowa City for a weekend doubleheader.

Fresh off its first win of the Tory Verdi era, UMass (1-1) will participate in the Hawkeye Challenge, taking on hosts Iowa on Saturday before facing either South Dakota State or Montana Sunday.

“It felt really good [to get the first win],” Verdi said, “I just think that’s a confidence booster for our team, when you get your first win under your belt. We’ve got to do a better job in some areas, but our players have come into practice every single day and they’re getting better, so I’m really excited about that.”

“We’re feeling great,” Mulligan said. “We all feel really excited. We’re going to use this momentum to push us through the weekend.”

The Hawkeyes are 2-0 on the season, having opened up their 2016-2017 campaign with wins over Oral Roberts and Hampton.

Iowa is led by senior guard Ally Disterhoft and sophomore forward Megan Gustafson, who scored 29 and 25 points respectfully, in the opener against the Golden Eagles.

“They’re big,” Verdi said of the Hawkeyes. “They’re big, and they can score from every level. They score a ton in the paint, they can shoot from three, they execute very well offensively. So we got to make sure we do a great job defensively, and we have to cover some ground within our zone.”

Verdi is still working with a short bench, as only six players saw time on the floor during Monday’s win. Without a deep rotation, managing minutes for this weekend’s doubleheader will be key for UMass.

“We have to look at minutes, look at personnel,” Verdi said. “We hope some players get healthy for us. I’m obviously very aware of our numbers, and we’re going to make the necessary adjustments.”

With a four-team tournament set-up, the Minutewomen will take on either Montana or South Dakota State following their matchup with Iowa, providing a unique scouting situation for Verdi and his staff.

“We’re prepared,” Verdi said. “Our assistant coaches have studied film on all of the teams in the tournament, so depending on who wins and who we play, we will be prepared for that team.”

Like the Hawkeyes, South Dakota State enters the weekend’s festivities with a 2-0 record, while Montana is 1-0, having beaten Great Falls in its only game of the year thus far.

Key starters like Leidel and Mulligan will need to continue playing at a high level for UMass to succeed through the weekend and beyond. For now, the Minutewomen are focused on carrying their momentum into this weekend’s tournament.

“We’re just excited to play in a tournament and have a longer trip together,” Leidel said. “We’re excited and hopefully we can come out with two wins.”

After wrapping up the weekend tournament in Iowa, UMass returns to the Mullins Center to take on Central Connecticut State on Wednesday.