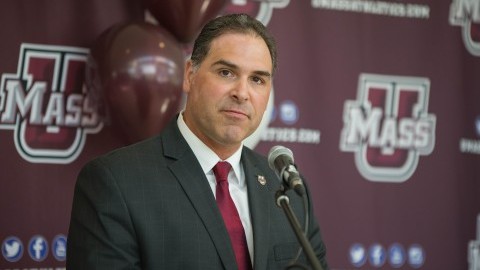 Even the most diehard Massachusetts women’s basketball fans may find themselves unable to name many of the members of this year’s team after a coaching change and injuries have led to a huge shakeup in UMass’ roster.

The group of Minutewomen first-year head coach Tory Verdi will put on the court in the team’s opener at Buffalo on Friday little resembles the team that won six straight games at the end of last season before falling to Fordham in overtime in the second round of the Atlantic 10 tournament.

Of the eight players who received regular playing time last year, only two, Leah McDerment and Maggie Mulligan, start the season healthy and on the roster.

These six players who last year made up 77 percent of UMass’ minutes and 87 percent of the Minutewomen’s points were all expected to be key members of this year’s team before they either left or got hurt, except for Timbilla.

McDerment said it has been difficult for the team to adapt to the large number of changes in UMass’ roster.

“It’s been rough, especially because most of them were unexpected,” McDerment said, citing Hill’s departure from the team and Lawrence and Stiff’s injuries. “It’s definitely been tough but it’s made us stronger and it’s made everyone feel so needed. We know that we have to perform day in, day out, and no one can rest.”

McDerment and Mulligan will both need to contribute more offensively to make up for the considerable losses. While they both started two-thirds of the games and averaged over 20 minutes a game, Mulligan averaged 5.1 points per game and McDerment with 2.8.

“I definitely feel pressure,” McDerment said. “I know that me and [Maggie] are feeling pressure to be more aggressive and more of a scoring threat than we were, but it’s nothing we can’t handle and I think that we’ve stepped up to the plate already and it’s going to be a different team this year.”

“I look at it as those coming into our program have a great opportunity,” Verdi said. “The freshmen have an unbelievable opportunity to step in a role and get experience right off the bat and it’s only going to make us better down the road.”

One of those younger players, Jessica George, has now been thrust into the starting lineup after appearing in less than half of last season’s games, averaging just 3.3 minutes per game.

George has adapted well to the change in her role, saying she has not noticed much of a difference since last season.

“It’s not really as hard as you might think,” George said, citing the work she put in at practice over the summer.

The other three healthy scholarship players, Ryan Holder, Hailey Leidel and Taylor Tucker, are all freshmen.

Holder and Leidel joined McDerment, Mulligan and George as the two starters in the team’s lone exhibition game before the season officially tips off.

Leidel impressed in last Thursday’s exhibition game against UMass Dartmouth, shooting 6-14 from beyond the arc.

“Hailey Leidel, I knew her when I was at Eastern Michigan, she’s a shooter, I recruited her, she chose UMass and then so did I, so we’re meant to be, but she’s special and when she gets it going, she can knock down shots for us,” Verdi said.

George best summed up the challenge facing the Minutewomen as they face the challenge of beginning the season without many of last year’s key players.

“It’s kind of intimidating, especially because they were key players, but at the same time it’s kind of motivation to step up, do what you have to,” George said. “You can’t really fix losing players so you’ve got to just move forward with what you have now.”