With ‘Amanda Knox,’ an infamous story is finally told right 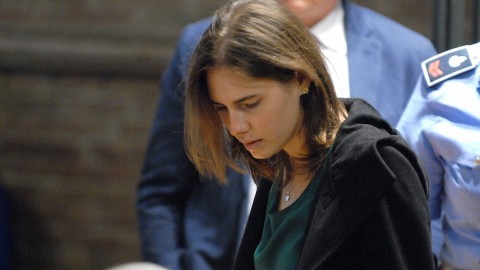 Nine years ago, everyone knew who Amanda Knox was.

She was the American student on every newspaper and TV station charged for killing her roommate in Italy. Her face and story were in the news for years with thousands of twisted versions on what happened that fateful night in November 2007. Netflix is now delving into this sordid, tragic story and promises to get the facts straight according to “Amanda Knox,” a documentary that claims the press and prosecutors butchered the real story.

The documentary starts off with a black screen with an eerie static sound playing. The date “November 2, 2007” slowly appears and the viewer knows exactly what they are about to see. We see a little house in the Italian countryside. It seems like the perfect place to spend a holiday, a place to get away and relax. But there is unfortunately much more than meets the eye.

We hear an Italian man making an emergency call to the local police department. He states he’s making the call on behalf of a woman named Amanda Knox. The screen transitions to a crime scene video taken by the Italian police. We see bloodstains, broken windows and bloody clothing like something straight out of a horror movie, but we all know this is real.

A bloody handprint is shown and then we see a bare foot, the rest of the unmoving body covered by a blanket. It is undoubtedly the homicide victim, who we learn is named Meredith Kercher. The frame serves these tragic facts straight.

We finally meet the woman we all think we know, Amanda Knox, ready to tell the world what happened. She’s 29 now, with experience for more than two lifetimes. She wears a pink sweater with minimal make-up. There appears to be a vulnerability in her eyes, as if she were taken somewhere she didn’t belong. She looks like someone who experienced true trauma, the type you cannot forget but try to move on from.

Directors Rod Blackhurst and Brian McGinn beautifully take us back to Italy in the fall of 2007. They use the entire case file, including police crime scene footage, recordings and media footage. Most importantly they interview Knox and Raffaele Sollecito, her then-boyfriend and alleged accomplice, providing their commentary about what happened during that time.

In their quest to be fair and balanced, Blackhurst and McGinn also provide commentary from lead prosecutor Giuliano Mignini and Nick Pisa, the Daily Mail journalist known for publishing Knox’s diary. The directors should be commended for providing both perspectives to provide a fuller narrative concerning the incident.

Sensationalized coverage claimed the over-sexualized devil of America had invaded the pure old world of Italy. There are countless clips of Knox and her family being followed by paparazzi and journalists as if they were movie stars. The courtroom turned into a sea of reporters with thousands of cameras. Different articles came out regularly, shifting details ever so slightly, fanning the flames of misinformation. A young American murderer obsessed with sex sells more magazines than an innocent and scared woman who just wants to go home.

It wasn’t until the acquittal of Amanda and Raffaele in the Italian Supreme Court in 2015 that the media was finally to blame. The court stated that there was an increased media attention for creating a “frantic search” for the guilt of Knox and Sollecito.

Nearly a decade after the case first unfolded, the public may finally get a better understanding of what happened. “Amanda Knox” seems to suggest there may have been a third party responsible for the murder and that Knox was a victim of an aggressive narrative created by the media. The Italian Supreme Court expressed this view when it ultimately acquitted Knox and Sollecito of all charges in March 2015.

“Either I’m a psychopath in sheep’s clothing or I am you,” Knox says at the documentary’s opening. Viewers are left to make up their own minds.

Lauren LaMagna can be reached at [email protected] and followed on Twitter at @laurenlamango.