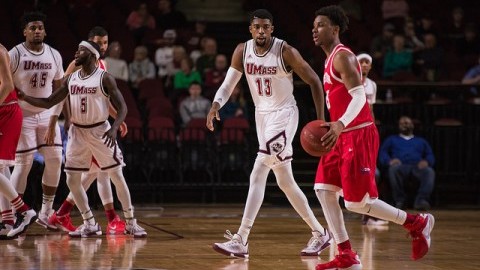 Massachusetts forward Zach Coleman knows his job for the UMass basketball team won’t be to score every point, grab every rebound or even lead the team in any statistical categories this season.

Coleman, a redshirt junior, was one of three members of the team to be a part of the Minutemen’s 2014 NCAA tournament run. Although he did not play after suffering a stress fracture in his left leg in the preseason prior to his freshman season, Coleman now enters his fourth year with the program.

With a talented freshman class full of big men expected to play some serious minutes in UMass’ rotation, Coleman is well aware, and embracing, the role as a veteran presence both on the court and in the Minutemen’s locker room.

“It’s very important for me to be a leader to those guys,” Coleman said after last Wednesday’s practice. “Especially because they’ve been coming for advice and things like that. I know the system. I know what’s going on – I know what (Kellogg) expects. I take that role pretty seriously, being able to tell everyone where they are supposing to be.”

Freshman forwards Chris Baldwin and Tyrn Flowers have been impressive in their short time with UMass, while arguably the best of the group, Brison Gresham, is still waiting to get clearance on his eligibility from the NCAA.

For Coleman, who’s battled injuries throughout his entire career with the Minutemen, becoming a vocal leader isn’t something he’s worried about with seniors Tyler Bergantino and Antwan Space graduating last spring.

“I’m vocal. I’ve always been pretty vocal, but I have to be more vocal now,” Coleman said. “Speaking and talking to my teammates, being there and stuff like that, that’s stuff I’ve always done.”

“I think so,” Kellogg said when asked if he expects Coleman to take on a larger leadership role. “Zach’s been good in practice. His knees and his injuries have been in and out. He has to be as much as a verbal leader and a guy who has to run the locker room or the clubhouse you’d say to just be there for the young guys. He’s been good.”

Berger and Holloway are the leading scorers among that group as both averaged 5.2 points per game last season, with Coleman following behind with 4.0, to go along with his 4.4 rebounds per game.

For Coleman and the rest of the Minutemen, the blend of returning players in the frontcourt combined with the young talent has made practices feel much more intense and lively with UMass opening its season Nov. 11 against UMass Lowell.

“I definitely love the competition,” Coleman said. “Everybody has had their day. Its fun for me – I just want our team to be successful. Whoever is supposed to play this position or that position, I’m down for whatever, as long as we’re winning.”

Coleman added of the freshmen: “Sometimes I think that everyone collectively – the older guys and coaches at times – need to remember that (they are freshmen). They do so many good things at times; some days they seem like they have it all figured out, and the next day it seems like they don’t. You do have to pull back and remember that they are only freshman, and that there’s five of them.”

“When guys like myself, Donte (Clark), C.J. (Andrerson) and Seth (Berger), when we’re all gone, the program is in really good hands.”