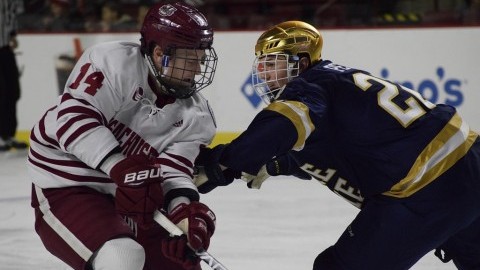 It’s no secret that the Massachusetts hockey team has struggled on offense this season. The Minutemen (4-7-2, 2-5-1 Hockey East) rank at the bottom of the conference in scoring with a 2.14 goals per game average.

A major reason for the anemic UMass offense early in the season has been the absence of senior forward Ray Pigozzi, who has been injured much of the season and last played against Connecticut on November 4.

However, you wouldn’t be able to guess any of that following the 5-4 victory over conference opponent No. 12 Notre Dame Friday. Pigozzi returned to the lineup and completed what is a very dynamic Minutemen first line.

The season-high five goals comes against an Irish (7-6-2, 3-3-1 HE) team that ranks second in the conference in goals allowed per game (2.17), and the combination of Pigozzi, captain Steven Iacobellis, and Austin Plevy accounted for four of those five goals.

“They’re three really gifted offensive players,” Minutemen coach Greg Carvel said. “If you put any three good offensive players together they’re going to have good chemistry. They’ve played together early in the year and they know each other from last year as well.”

Iacobellis and Pigozzi in particular have shown great chemistry on the ice throughout their careers. Both players have been line mates in 73 games over the past four seasons, and have combined for 109 points when on the ice together (36 goals, 73 assists).

Pigozzi made his presence felt early, as he opened the scoring for UMass with a power play goal at 10:28 into the second period. Both Plevy and Iacobellis tallied an assist on the goal with a series of pretty passes that opened up the net down low for Pigozzi.

“Just being back with the guys every day has been great,” Pigozzi said. “First couple of periods there I was a little rusty, but it’s great to be back on the ice.”

The much-maligned special teams for the Minutemen came to life as the team went 3-for-4 on the power play. This comes following a trip to Belfast, Ireland where UMass struggled mightily on the power play going a combined 1-for-13 in two games.

“We needed to score,” Carvel said. “We were playing well but we just weren’t scoring. The power play was part of it, the other part was scoring some ugly goals.”

Iacobellis – who finished with a season-high three points for the team in a single game – scored the second just over six minutes after Pigozzi to give the Minutemen a 3-0 lead.

Plevy completed the first line hat trick on a power play with a goal that deflected past Notre Dame goalie Cal Petersen, which put UMass ahead 4-2 with just over 12 minutes to go.

“(It was a) fortunate bounce and that’s something we’ve been stressing on our power play,” Plevy said. “It was a good night working on getting pucks to the net. Trying not to be too fancy.”

Pigozzi’s second goal – making him the first Minutemen player to score two in a game this season – was the icing on the cake for what was a great night for this first line at 12:46 into the third period. His goal would also prove to be the game winner.