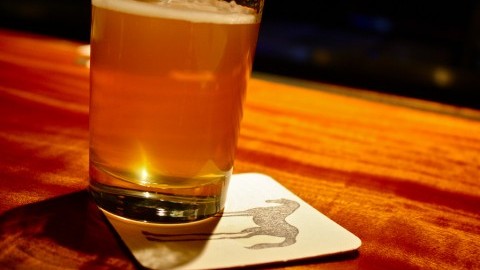 By Madeleine Jackman and Chad Stoughton

This week, we decided to head to downtown Amherst to visit High Horse. A change of pace from the sports bars that populate much of the area, High Horse would be the town’s token hipster bar if not for its popularity and selection – a wide variety of beers, liquors and mixed drinks, including a home-brewed kölsch.

Split between a low-key downstairs bar and restaurant, and a more upbeat upstairs bar featuring four pool tables, the High Horse has options for whatever your mood is. For you, the borderline token hipster, the eccentric college professor or the bar-going everyperson, we present an unofficial review.

Mad: Well, Chad, High Horse is a special bar in that it always has a good number of people there regardless of the time or the day, but even at its most crowded, there is still room to breathe. This creates a really welcome and laid-back atmosphere.

Chad: So which of the two bars do you prefer?

Mad: I definitely tend to go upstairs more often. The bar feels less formal, there are more college students there and most importantly it’s where I get to beat you in playing pool.

Chad: At this point I would like to inform the reader that you have not actually won a game yet.

Mad: At this point, I would like to inform the readers that Chad hit in the eight ball not once, but twice. Moreover, at the time of these incidents, we had sunk roughly the same number of balls. However, and this point is crucial, when I lost by hitting in the eight ball, Chad had six balls left on the table, and I merely had one.

Chad: I’m sorry I can’t hear you all the way down there at the bottom of your four game losing streak.

Mad: Anyway, back to the point, do you prefer the upstairs or the downstairs?

Chad: I actually prefer the downstairs bar. It tends to be quieter and there are more places to sit and talk with your friends, and even meet some interesting people. There’s a bookshelf in the back, and you can get some pretty great food. As the name suggests, High Horse is unashamed of its own semi-ironic pretentiousness, and I kind of enjoy it.

Mad: It does have a great atmosphere in that regard, but I do really enjoy the more modest parts as well, such as their $3 pint of Kölner Dom. Want to tell us a little bit about it, Chad?

Chad: The Kölner Dom is a kölsch style beer brewed at High Horse. It’s their cheapest beer, by a good margin, but that doesn’t mean it’s not high quality. It’s a solid choice for anyone that prefers a clean-tasting lager or pale ale.

Mad: I am vehemently opposed to calling it a pale ale. I know there’s some debate, but it tastes like a lager to me, and our inside High Horse source called it a lager himself, specifically a kölsch, historically brewed in Cologne. An inside German source also believes that it is a lager.

Chad: No, I tend to agree, kölsch tend to share more characteristics with lagers than ales, but they do sit somewhere in between.

Mad: Regardless, it’s a tasty beverage and doesn’t hurt the wallet. In fact, the whole pint is $2 cheaper than a tequila shot, which I discovered the hard way – by betting on pool and losing at pool.

Chad: You know, I honestly know almost nothing about tequila.

Mad: Neither do I really, although it is my shot of choice, and typically the bottle says made with 100 percent pure agave.

Chad: Well, I guess we won’t talk about tequila now then.

Overall, High Horse is a great bar to visit on any night. With local beer, good food and chill people, it rarely disappoints.