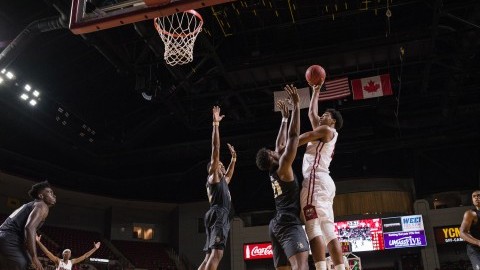 Though it’s not quite New York City, Amherst and the Massachusetts men’s basketball team will play host to Pacific on Thursday in the first of four games as part of the Gotham Classic.

UMass has not been playing to full capacity through the first seven games of the season. Forward/center Brison Gresham has only been eligible for a week after the NCAA deemed him eligible, while guard DeJon Jarreau missed a week due to an inflamed callous on his foot.

With six games left against nonconference opponents, the Minutemen (5-2) are in a position to play with a full roster and test different lineups and rotations ahead of conference play.

“You know there is the definite kind of game plan of the immediate and then kind of something that might look a little different in a month and half from now,” UMass coach Derek Kellogg said. “Or it may not, it may look very similar. We’ve spent a lot of time, even as a staff talking personnel, talking rotations minutes and things of that nature.”

With only two games and a total of 13 minutes under his belt, Gresham has not even scratched the surface of his potential, according to Jarreau.

“He’s way better,” Jarreau said. “Way better than that. He’s a guy that gets in a groove and once he gets into a groove, he’s ready.”

Kellogg has expressed to eventually field a starting line that would feature both Jarreau and Gresham along with center Rashaan Holloway.

A spot in the starting lineup is something that Gresham will earn over time and with consistent play. These upcoming games can serve as a showcase for many of the freshman to prove their worth before the Minutemen host St. Bonaventure to start play in the Atlantic 10 on Dec. 30.

The Tigers (3-4), bring a veteran lineup with four of the five starters being seniors. Ray Bowles, the only non-senior in the starting lineup, leads Pacific in scoring, averaging 14.6 points per game this season.

With Jarreau back in the lineup, Luwane Pipkins may have some of the pressure he has been bearing the last two weeks lifted off his shoulders.

“He wants to win so bad that sometimes he takes it on his shoulders on both ends of the floor and you know for a guy that really is a freshman, I know everybody kind of everybody watches and thinks he is a senior,” Kellogg said. “He’s a freshman, to be really your best defender hands down, and then having to kind of run the offense and also looking to score.”

Though defensively he has been wreaking havoc against opponents, he has fallen into somewhat of a slump on offense. In the last three games against Central Florida, Wagner and Harvard where Pipkins was placed into the starting point guard role, he has made 12 of his 43 shots from the field, and shot 12 percent on 3-pointers.

Though with Jarreau back, he will retake the starting point guard role, allowing Pipkins to play more off the ball.

Jarreau’s sudden return from injury has him feeling better than before he went down with what was originally thought to be a fractured foot.

“I just want to play, honestly,” Jarreau said. “When I found out that four to six weeks thing, that kind of had me mad. But I’m just happy to be back so soon.”

The Minutemen’s offense is bound to benefit from having both Jarreau and Pipkins on the court. The two have accounted for the majority of UMass’ production per game averaging 10.0 and 11.1 ppg respectively. Establishing chemistry at an early stage of the season has Jarreau excited moving forward.

“I didn’t really know how good we were going to play together,” Jarreau said. “So start off the season like that, it’s good because moving along in the season we can just get better and better.”

Kellogg thinks some of the freshmen’s success, whether it be Pipkins’ defense or Jarreau’s offense, has brushed off on other freshmen such as Ty Flowers.

“It’s coming. You see in a guy like Ty Flowers,” Kellogg said. “I mean I think he paid his dues to say the least. He didn’t play much at times and then he became a guy that was defensively pretty good for us the other day.”

Flowers put up team highs with 20 points and nine rebounds against UCF on Saturday.

Pacific is the first of four teams UMass will face as part of the Gotham classic. In the coming weeks the Minutemen will face North Carolina A&T, Kennesaw State and Rider.