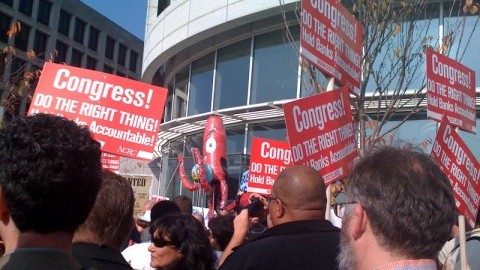 In 2008, America suffered one of the biggest financial crises in its history. The economy plummeted and many Americans lost their jobs due to the negligence and greed of banks. Before the crash, banks such as Goldman Sachs and Bank of America began selling something called Mortgage Backed Securities or MBS. Banks also had something called collateralized debt obligations (CDOs), which were collections of assets – such as mortgages or bonds – that were bundled together and sold to investors.

These CDOs were filled with subprime mortgages, which are basically mortgages that look stable but are not. The banks and the credit agencies sold these bad mortgages to people who could not afford them and when it came time to pay, which they couldn’t, the CDOs collapsed, and with them, the economy.

After the collapse, President Obama, along with former Senator Chris Dodd and former Representative Barney Frank, proposed a bill that went into effect in 2010, which helped to put greater restrictions onto the big banks in hopes of preventing another collapse.

This has so far been holding, but recently President-elect Trump has vowed to dismantle the Dodd-Frank Act, leaving some concerned with the future of the economy. One of the biggest proponents of repealing the Dodd-Frank Act is Steven Mnuchin, the former Goldman Sachs banker who profited off of the crash of 2008, and is currently Trump’s pick for Secretary of Treasury.

While the Dodd-Frank Act may have some faults, it is largely responsible for ensuring that the banks stay honest and that there is sufficient oversight of the economy. Should the new administration repeal it, the banks may be free to operate with little oversight, leading to a repeat of the economic crash of 2008.

But perhaps just as frightening as the repeal of the Dodd-Frank Act is the fact that CDOs are making a comeback, and no one seems to notice.

In 2015, Goldman Sachs and other banks began peddling something called a Bespoke Tranche Opportunity (BTO), which, according to Bloomberg, is a fancy name for a CDO that allows a dealer to cater to investors.

These new BTOs seem to be a terrifying case of déjà vu, with the promise of the potential for higher returns than would be possible when buying a typical bond, but also the potential that the downsides could be much greater.

These BTOs smell suspiciously like the CDOs of the 2008 crash and seem to promise the same things. Unfortunately, nobody seems to care. When researching for this piece I found very little coverage about BTOs, save for some information in reference to the 2015 movie “The Big Short,” and only one article directly covering the new BTOs by Bloomberg. The 2008 crash is still fresh in many peoples’ minds and yet we seem to be blatantly ignoring what seems to be history repeating itself.

There is a fair chance that we may soon see high priced mortgages going to those who clearly cannot afford one, and as a result there will be many mortgages that get rated well above their standard. Should news of this come to the front page, the meaning behind the old saying “fool me once shame on you; fool me twice shame on me” will be painfully clear. Once again the American economy, and therefore the American citizen, will suffer severely.