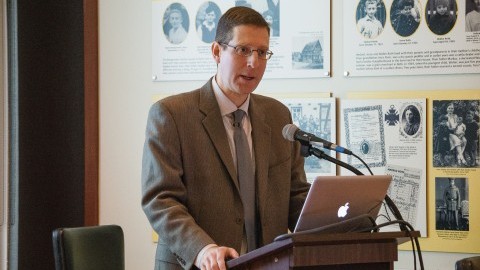 Professor Avinoam Patt from the University of Hartford’s department of modern Jewish history gave a lecture about the creation of Israel at the Institute for Holocaust, Genocide, and Memory Studies at the University of Massachusetts on Wednesday.

Patt introduced his lecture by questioning what the connection between the Holocaust and the formation of Israel was, as well as what influence Zionism had.

In answering this question, Patt described three prominent obstacles that existed in creating the Israeli state.

“First and foremost was the British White Paper of 1939,” said Patt. “It limited Jewish immigration to the Palestinian lands, capping it at 75,000.  Restrictions were also placed on the rights of Jews to buy land—essentially allowing only a Palestinian majority to legitimize a potential Jewish state.”

Patt argued that the destruction of the European Jewry after World War II made it increasingly difficult to consolidate a civic body. This problem further exacerbated the demography of Palestine: should the Israeli state be created, the body polity would be comprised of an Arab majority. This “Arab majority crisis” would inevitably lead to difficulties in defining Israeli citizenship, he said.

In addressing these obstacles, Patt argued that, “it is not the Holocaust per say, but the political decisions about what to do about Jewish displaced persons, that played a critical role in the creation of the state.”

He said that the emergence of Zionism after World War II was related to a sense of displacement felt after the Second World War among Jews.

Patt spoke about Abraham Klausner, an American army chaplain who worked in the resettlement of Holocaust survivors in Western Europe.

“Klausner assisted in placing Jews in these ‘displacement camps,’” Patt said. “Often these were former military barracks, abandoned factories, and the like.”

Eventually, appalled by the conditions displaced Jews were living in, Klausner began to write to the U.S. government requesting assistance.

“The investigation resulted in the Harrison Report,” Patt said. “The report delivered a scathing review of the living conditions found within the displacement camps. It said ‘we are treating the Jews like the Nazis did without exterminating them.’”

The main proposal delivered by the Harrison Report was to grant 100,000 immigrants access to Palestinian land, he added.

In October of 1945 David Ben-Gurion, the first prime minister of Israel, began to visit displacement camps. During those visits, he outlined plans of Israeli nationalism, much to the enthusiasm of his Jewish audience.

Patt emphasized the role of the youth and the post-Holocaust institutions that were created. He particularly described the “Kibbutz,” a traditional agricultural community, as a place that provided social stability and a sense of family.

“By 1946, there was an overwhelming consensus, aroused in agricultural labor and displacement camps, that the Jewish people needed to consolidate,” Patt said. “Zionism continued to provide that means of granting that collective.”

Patt said that by 1947, the wishes of the Zionist movement were coming to fruition: the British turned over the responsibility of the Palestinian mandate to the United Nations. By the end of the year, a charter was developed, outlining and implementing the modern state of Israel.

Paraphrasing the UN Partition Plan, Patt stated “Palestine should be portioned, as it presents the most feasible way to solve the problem of the displaced problem in Europe.”

He closed in reflecting on the various interpretations for the rise of “displaced person Zionism.”

“The first conclusion is that it provided for solution to the problem of post war statelessness in the international filing system of citizenship,” he said. “It granted a new direction in the conclusion to the Holocaust.”

Patt said that Zionism was able to respond to the “psychological needs” of young survivors of the Holocaust.

“I think that the primary concern after the war, for the Jewish displaced person, was to rebuild a community—to find a family,” Patt said.

Josh Raposa can be reached at [email protected]