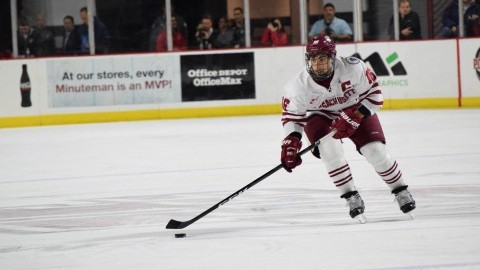 Since their five goal explosion Dec. 2 against Notre Dame, the Massachusetts hockey team have struggled to put pucks in the opposing team’s net.

“It’s been the same all year long,” Minutemen Coach Greg Carvel said postgame about not being able to capitalize on scoring chances. “We just don’t score a lot of goals where you’re banging in rebounds. Unfortunately we don’t have that in our game right now, so that’s why we have a hard time scoring goals.”

UConn (6-6-6, 4-3-2 HE) had a 2-0 advantage for most of the evening and were persistent in not allowing UMass any high-percentage scoring opportunities until captain Steven Iacobellis broke through on the man-advantage at 17:08 of the third period to give the Minutemen their first tally in two contests.

UMass did have spurts of extended pressure in the Huskie’s zone, most notably in the second period, but just could not manage to fool UConn goaltender Adam Huska (24 saves) enough times, when it was all said and done.

“I thought our guys competed hard tonight, just didn’t do a good enough job getting to the net against Huska who’s a good goaltender,” Carvel said.

The Minutemen did end up generating more shots than the Huskies as they outshot UConn 25-19.

The power play for the Minutemen went 16 percent on the night as Iacobellis’ goal was the only goal on the man-advantage for UMass in six tries.

“Of course when you get six chances you need to score more than one,” Carvel said. “We had our opportunities but I thought special teams-wise we did a good job.”

Iacobellis furthered his strong play notching his third goal of the season (9 points) and Carvel has been pleased with his captains overall game as of late.

“To give Steve credit, I challenged him after four or five games into the year and he’s taking that challenge and he’s really in a rhythm,” Carvel said. “What he’s done on the ice, off the ice, in practice every day, is now translating into games and you’re seeing him score some nice goals and really be an effective player for us.”

“Not just the goals, he’s winning battles,” Carvel continued. “He’s not a big kid but he’s got a lot of heart. To me as a first year coach he’s been a very good captain to this point. We stress to our guys, ‘You get what you deserve’, and he’s getting what he deserves right now.”

Following Friday’s goal, Iacobellis has notched 75 career points as a member of the Minutemen. As for the recent improvement – six points in five games – he gave most of the credit to his teammates.

“I haven’t really changed much, just been thinking shoot the puck more and more as much as I can,” Iacobellis said. “Once again my line mates made good plays finding me so credit to them.”

Iacobellis also reiterated Carvel’s message of scoring ugly goals as a way to jumpstart the offense as a whole.

“We stress that,” Iacobellis said. “We’re trying to find ways to put the puck in the net. Unfortunately this year we haven’t found any rebound goals. That’s something we need to work on, we’ve talked about it, we’re well aware of, but it’s an area we need to work on.”